Items related to A Nation in Waiting: Indonesia in the 1990s

Schwarz, Adam A Nation in Waiting: Indonesia in the 1990s

A Nation in Waiting: Indonesia in the 1990s 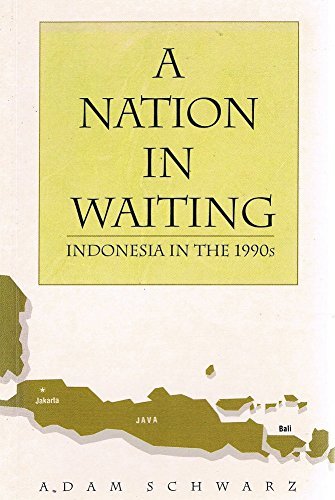 Spanning a wide variety of contemporary issues, this text offers a detailed glimpse of one of the world's largest and least understood nations. It chronicles the economic development Indonesia has enjoyed under the 27-year leadership of President Soeharto, as well as the difficult challenges which lie ahead. Using first-hand information, the author gives life to the heated debates on economic policy, corruption and the controversial role of ethnic-Chinese entrepreneurs. The book analyzes the political demands of Indonesia's Muslim community, the mishandled incorporation of East Timor, the emerging debate on human rights, and the thorny problem of arranging a smooth transition of power. The underlying theme is the widening gap between an increasingly modernized economy and a rigid political system that is struggling to keep up with the times.

Adam Schwarz reported on Indonesia for the Far Eastern Economic Review from 1988 to 1992. Having enjoyed wide access to many of Indonesia's leaders and most prominent citizens, he now offers a rare behind-the-scenes view of Indonesia in which 'Indonesian voices' tell the story.

1. A Nation in Waiting: Soeharto's Indonesia in the 1990s Schwarz, Adam