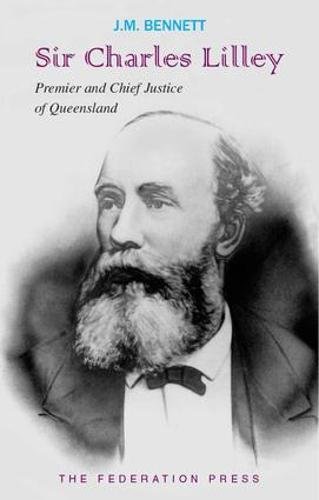 J M Bennett's new biography shows the mercurial figure of Lilley to be one of the giants of colonial Australia, a politician who took on the squatter class and forced democratic reform, earning the enduring, virulent hatred of his opponents; a Chief Justice of brilliant calibre until his one disastrous mistake.

"Sir Charles Lilley has proven a polarising figure, often subject to caricature and ridicule. As Dr Bennett observes, the record of Lilley's formidable achievements has been distorted by adversaries, particularly the mostly hostile press of the time, or overshadowed by some infamous errors of judgment. All of this has to date inhibited a balanced appraisal of his life. Dr Bennett's biography goes a long way towards redressing the imbalance.

The author's narrative reveals a man of accomplishment: newspaper editor, a "founding father" of the legal profession, the first Queen's Counsel in Queensland, reformist politician, Attorney-General, Premier and Chief Justice."

The Hon Paul de Jersey, AC, Chief Justice of Queensland (from the Foreword)

In the fourteenth and one of the most ambitious volumes in his series of judicial “lives", Sir Charles Lilley, Premier and Chief Justice of Queensland, John Michael Bennett continues a project he began as a Senior Research Fellow in Law at the Australian National University 40 years ago.

His (19th century) Lives of the Australian Chief Justices has been described by Australian Historical Studies as a series that adds “an important missing dimension in the field of legal history in Australia [and makes] engaging reading”, it reflects Dr Bennett’s fastidious research coupled with his long experience in professional law practice and in various academic positions.

His extensive publications, chiefly in Legal History, but also as a law reporter and sometime Editor-in-Chief of The Australian Digest, have received much recognition and praise. He was twice awarded the C H Currey Memorial Fellowship by the State Library of New South Wales; was a Churchill Fellow in 2000; and received the New South Wales History Fellowship 2006 for his writing a biography of Sir Alfred Stephen, Third Chief Justice of New South Wales.

On examination of published works, he has received the rare degrees of Doctor of Laws (Sydney) and Doctor of Letters (ANU); and he is an Honorary Doctor of Letters (Sydney). A Life Member of The New South Wales Bar Association, and a Fellow of the Australian Academy of Law, he was appointed a Member of the Order of Australia in 2005 for services to the law.