Items related to For The True Believers: Great Labor Speeches that Shaped...

For The True Believers: Great Labor Speeches that Shaped History 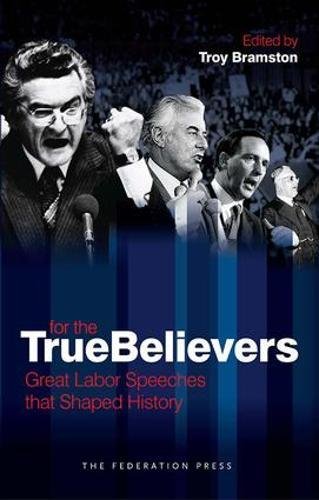 Graham Freudenberg, Australia's greatest speechwriter, says the Australian Labor Party was built on speeches. This book brings together great Labor speeches which give voice to the party's enduring values and achievements, and place it and its principal figures at the centre of historic events.

Bob Hawkes urges South Africa's apartheid leaders to listen to the spirit of men and women yearning to be free.

Paul Keating's belief in Labor as the people who can dream the big dreams and do the big things.

In the preface to this book, Troy Bramston writes: "this book comes at a time when Labor needs to more effectively define and communicate what it believes in and what it stands for, and is beset by many challenges." I agree with this sentiment, and further, I consider that this book highlights well the values and passion that underpin the Labor party. ... Bramston presents a preamble to each speech, providing context and thoughtful analysis. The book is both refreshing and timely, helping the reader experience the hope, inspiration and pride that Australian politics should deliver, in an era where political debate and commentary is dominated by both disrespect and cynicism. Read full review... - Linda Connelly, Law Letter, Law Society of Tasmania, Autumn 2015 ... the speeches have a diverse subject matter. ... There are speeches that call for change, action or steadfastness in response to most of the great issues that have faced the nation. The challenges posed by free trade or protectionism, world war, conscription, the White Australia policy, the equality of men and women, reconciliation between Aboriginal and non-Aboriginal Australians, native title, Australia's place in the world and her 'great power' alliances, the dissolution of the Communist Party of Australia, the Vietnam War and the 1975 Constitutional crisis, are all addressed in the course of this anthology. There are speeches relevant to Labor's great schism of the 1950s, the Split. The book is most likely to be enjoyed by those with an interest in the techniques of persuasion, Australian history or the Australian Labor Party. Read full review... - MR Tyson, Bar News, Autumn 2014 The collection's true value is to highlight those speeches where the ALP leader has made the right speech at the right time, expressing true sentiment without becoming too sentimental, appearing non-partisan while reaffirming the political legitimacy of the leader and by inference, the Australian Labor Party. ... Troy Bramston has done well to bring the art of Labor speechmaking to greater attention by the reading public. It will also be a useful reference book for those wishing to understand the evolving nature of the Australian Labor Party. - Lyndon Megarrity, ABR, Dec 2013-Jan 2014 ***A copy of True Believers is on the desk of Barack Obama's speechwriter in The White House, Cody Keenan *** A decline in the quality of public speech has recently been understood as both cause and symptom of a crisis in Australian social democracy, even in our politics more generally. In the foreword to this valuable collection of Labor speeches edited by labour historian and Australian columnist Troy Bramston, Graham Freudenberg, the doyen of Australian political speechwriters, bemoans the decline of the public meeting, which, he feels, has undermined the quality of democratic politics itself. Bramston is in reality a creator of party tradition as much as a collator and presenter of it. This collection - which includes commentary that is informative (if occasionally tendentious in a New South Wales Labor Right kind of way) - will be a valuable teaching tool in schools and universities. Let us also hope that it might help revive the declining art of political speech-making. - Frank Bongiorno, ANU_ Labour History, November 2013 True Believers is like a family snapshot album that illuminates familial traits. It is genial, embracing and fiercely loyal, proud of who it is and what it is. It can be a little pompous at times, and sometimes a little teary but its great redeeming qualities are pragmatism and egalitarianism; equal outcomes are subject to constant debate, but the right to equal respect was never in doubt. If there is an argument against publishing an anthology of this kind - a handsome hardback no less with a binding that should preserve it well into Labor's third century - it is Google. Yet good books show up the internet's shallow pretensions, hollow promises and limited horizons. Many of these speeches would still only be available in part or in memory if Bramston had not hunted them down in some forgotten archive.What Bramston also offers, and the internet conspicuously doesn't, is context. It actually matters what happened before and after, and it matters to whom the oration was directed. Bramston tells us in a concise, authoritative introduction to each speech. - Nick Cater, The Australian These speeches plunge the reader into the heat of the political moment: they bring history alive through the voices of the men and women making it. - Pick of the week, The Sydney Morning Herald [An] excellent anthology of speeches... Whatever your ideology, Bramston's collection is already a compulsory reference for anyone interested in Australian politics. - Chris Kenny, The Australian Verdict: gripping. The most pertinent message of this book is not to do with Labor-Liberal rivalries, but with the decline in public speaking. To reread some of Labor's great orators (Chifley, Whitlam, even as recent a speaker as Kim Beazley) is to be reminded how poorly our new leaders articulate their visions and how petty political debate has become. - Baz Blakeney, The Herald-Sun

Keith Mason has been a solicitor, barrister, law reformer, solicitor-general, president of a court of appeal, law teacher and mediator. He has published on topics including judicial method, legal taxonomy, the law of restitution, and the interface of law, morality and religion. Currently he is a visiting professorial fellow at the University of New South Wales and the chancellor of the Anglican diocese of Armidale. This work, Lawyers Then and Now, combines the interests of an amateur legal historian with insights drawn from a fortunate life in the law.

For the True Believers (Paperback)

For the True Believers (Paperback)