Items related to Press on Regardless: The Story of the Fifth Royal Tank... 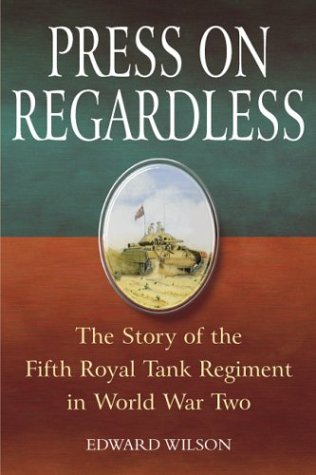 Based on the unit's War Diary, Wilson gives daily accounts of the fortunes and misfortunes, battles and hardships of a Regular Army Regiment in the famous Seventh Armoured Division - the Desert Rats. It is supplemented by personal accounts provided by officers and men who shared the triumphs and disasters of war as well as its humorous side. It is also complemented by a chapter by chapter analysis of the war as it affected both Allies and Axis with a chronological summary of other main events. Notes and technical details are also included.

(Location: Halstead, Essex) served with the 'Fifth Tanks' and is active in its Old Comrades Association. By profession a solicitor, he has been a national and an international Trade Association director. He has written A First Born Son which he describes as a Modern Medieval Mystery Play.

1. Press on Regardless: The Story of the Fifth Royal Tank Regiment in WWII

Book Description The History Press, 2003. Condition: Good. A+ Customer service! Satisfaction Guaranteed! Book is in Used-Good condition. Pages and cover are clean and intact. Used items may not include supplementary materials such as CDs or access codes. May show signs of minor shelf wear and contain limited notes and highlighting. Seller Inventory # 1862272174-2-4

2. Press on Regardless: The Story of the Fifth Royal Tank Regiment in WWII

Book Description The History Press 2003-07-01, 2003. Hardcover. Condition: Good. No Jacket. Item is in good condition. Some moderate creases and wear. This item may not come with CDs or additional parts including access codes for textbooks. This may not have a dust jacket. Might be an ex-library copy and contain writing/highlighting. Photos are stock pictures and not of the actual item. Seller Inventory # DS-1862272174-3

3. Press on Regardless: The Story of the Fifth Royal Tank Regiment in WW II

Book Description The History Press, UK., 2003. Hardcover. Condition: Very Good. Dust Jacket Condition: Very Good. 1st Edition. The Fifth Royal Tank Regiment was raised in 1916 and disbanded in 1969.'Pass On Regardless' covers its history in World War Two . Tied up with the rest of the allied armies in the Low Countries in 1944-45, the Regiment crossed the Rhine in March, then, five days before the Axis surrender, was the first fighting unit to enter Hamburg. There is light wear to the DJ. PLEASE NOTE: International economy shipping to world zones 1 and 2 is by sea that could take up to 90 days to arrive. Seller Inventory # 02812

4. Press on Regardless: The Story of the Fifth Royal Tank Regiment in WWII

Book Description The History Press, 2003. Hardcover. Condition: GOOD. Has little wear to the cover and pages. Contains some markings such as highlighting and writing. Seller Inventory # 1862272174_abe_gd