Items related to Stasiland: Stories from Behind the Berlin Wall

Funder, Anna Stasiland: Stories from Behind the Berlin Wall 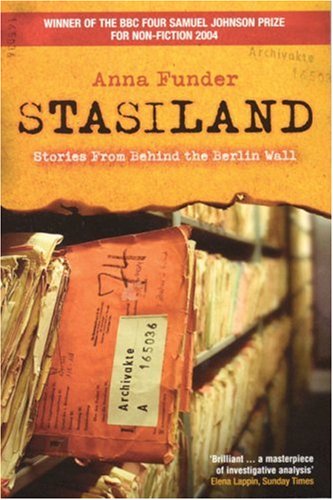 In 1989, the Berlin Wall fell; shortly afterwards the two Germanies reunited, and East Germany ceased to exist. In a country where the headquarters of the secret police can become a museum literally overnight, and one in 50 East Germans were informing on their countrymen and women, there are a thousand stories just waiting to get out. Anna Funder tells extraordinary tales from the underbelly of the former East Germany - she meets Miriam, who as a 16-year-old might have started World War III, visits the man who painted the line which became the Berlin Wall and gets drunk with the legendary "Mik Jegger" of the East, once declared by the authorities to his face to "no longer to exist".

Anna Funder's penetrating and dispassionate Stasiland really begins with one significant date: the year 1989. The Berlin Wall falls and the history of a country that had become a microcosm of the Cold War is changed irrevocably. With the hated symbol of the enforced division between East and West reduced to rubble, the two Germanys--East and West--are able to reunite; grey, depressed East Germany becomes a memory.

After the initial euphoria, the change was hard for the world to accept, but it was both exhilarating and unsettling for the denizens of the Soviet bloc state, who had lived under the brutal, paranoid regime of the secret police, the dreaded Stasi of the title. For the inhabitants of East Germany, there were some stark statistics: one in 50 East Germans had informed on a fellow citizen, and human beings behaved in fashions unthinkable just the space of a wall away.

The amazing stories that Anna Funder tells in Stasiland bring to life with extraordinary vividness both the dark and the more human sides of life in the former East Germany: a young girl who could have started World War III, the man who laid down the line that became the Wall. These and a hundred other tales (from both the recent past and the present, as Berlin still struggles with the legacy of history) make for a highly unusual book, the final effect of which is as life-affirming and positive as the destruction of the Wall must have been for those who watched. --Barry Forshaw

'Stasiland...is a terrific act of life-giving to people who have lacked not just a voice but an audience’ -- Telegraph

‘A brilliant and necessary book about oppression and history...Here is someone who knows how to tell the truth’ -- Evening Standard Books of the Year

‘A journey into the bizarre, scary, secret history of the former East Germany that is both relevant and riveting’ -- Travel Books of the Year, Sunday Times

‘Funder is a superb interviewer...she truly excels in the rendering of her sessions with former Stasi employees -- Sunday Times

STASILAND: STORIES FROM BEHIND T