Items related to History of Bombing 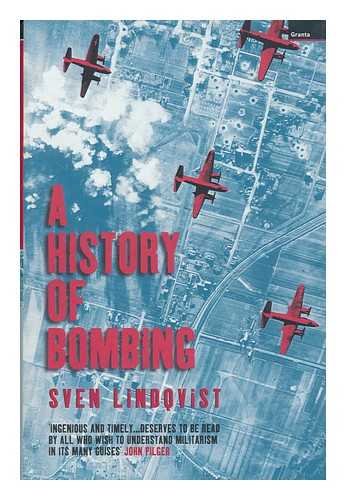 On 1st November 1911, Lieutenant Cavarotti leaned out of the cockpit of his delicate aircraft and, holding a Haasen hand grenade, began one of the most devastating military tactics of the 20th century: aerial bombing. This is but one of the points of entry Lindqvist presents in this innovative history. Structuring the book in a way that re-enacts the disruptions of history caused by the advent of the bomb, Lindqvist offers his readers a series of ways into and paths through this re-examination of a century of war, looking at the fascinating histories behind the development of air power, bombs and the laws of war and international justice, demonstrating how the practices of two world wars were born of colonial warfare.

Sven Lindqvist has acquired a reputation as an innovative writer with an unorthodox line in cultural histories, so expect the unexpected with A History of Bombing. Rather than a straightforward linear narrative, Lindqvist has divided the book into a labyrinth of 399 short sections that can be read in any number of orders. The author has established 22 entrances into the book and to follow the different themes you have to weave your way backward and forward through the text; if you get waylaid by another section en route you end up somewhere else entirely. The idea behind this structure is to demonstrate the chaos of history and the difficulties in navigating a coherent path through differing viewpoints and interpretations. As an intellectual conceit it might sound brilliant but the reality is somewhat different. Reading this book is like wading through treacle; it is demanding, time-consuming and ultimately frustrating. This is a pity, because had Lindqvist kept to a more conventional structure one suspects his arguments might have carried more weight. Lindqvist draws his material from both official and personal sources and his aim is to make clear the immorality of bombing. Unfortunately he is not always a reliable witness, as his desire to prove his case results in some important documentary omissions. His discussions of both the blanket bombing of Germany during the Second World War and the dropping of the atom bombs at Hiroshima and Nagasaki contain almost no reference to how events might have panned out had they not taken place and whether there might have been an even greater loss of life. For the reader with tenacity and perseverance there is a decent enough polemic to be found; for those who are looking for a more detailed and accessible history, Robin Neillands's The Bomber War is a far more rewarding read. --John Crace

'So comprehensive is Lindqvist’s investigation that it’s hard to imagine a more assiduous chronicler of the subject.' -- Publishing News

'Sven Lindqvist is not only a remarkable historian, he is also one of the best storytellers in the historical profession today' -- Joanna Bourke, Times Literary Supplement

‘He writes with infectious moral anger, and much humour and intelligence’ -- The Guardian

Book Description Condition: Acceptable. Reading copy. Will have moderate to heavy reading/age wear and/or cracked/loose hinges or binding. May have moderate to heavy markings, staining and/or water warping. We take great pride in accurately describing the condition of our books and media, ship within 48 hours, and offer a 100% money back guarantee. Customers purchasing more than one item from us may be entitled to a shipping discount. Seller Inventory # 1M5000006HFQ_ns

Book Description Hardcover. Condition: Good. Good condition is defined as: a copy that has been read but remains in clean condition. All of the pages are intact and the cover is intact and the spine may show signs of wear. The book may have minor markings which are not specifically mentioned. Most items will be dispatched the same or the next working day. Seller Inventory # wbb0018952207

A History of Bombing.