Sixty Million Frenchmen Can't Be Wrong: What Makes the French So French? 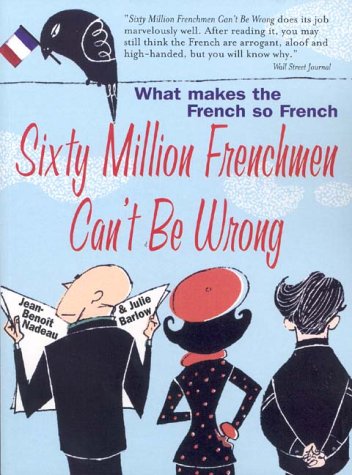 The French drink, smoke and eat more fat than anyone in the world, yet they live longer and have fewer heart problems than the English and the Americans. They work 35-hour weeks and take seven weeks' paid holiday each year, yet they are the world's fourth-biggest economic power. So how do they do it? From a distance modern France looks like a riddle. It is both rigidly authoritarian, yet incredibly inventive; traditional (even archaic) yet modern; lacking clout on the international stage yet still hugely influential. But with the observations, anecdotes and analysis of the authors, who spent nearly three years living in France, it begins to makes sense. 'Sixty Million Frenchmen Can't Be Wrong' is a journey into the French heart, mind and soul. This book reveals French ideas about land, food, privacy and language and weaves together the threads of French society, uncovering the essence of life in France and giving, for the first time, a complete picture of the French.

"Should be handed out at Calais and Charles de Gaulle airport to anyone hoping to get a grip on France." Daily Telegraph, 10 March 2004

Born in Sherbrooke, Quebec, in 1964, Jean-Benoit Nadeau holds a bachelor's degree in political science and history from McGill University. A journalist since 1987, he has been the recipient of 17 journalism awards.

1. Sixty Million Frenchmen Can't Be Wrong : What Makes the French So French

2. Sixty Million Frenchmen Can't Be Wrong : What Makes the French So French