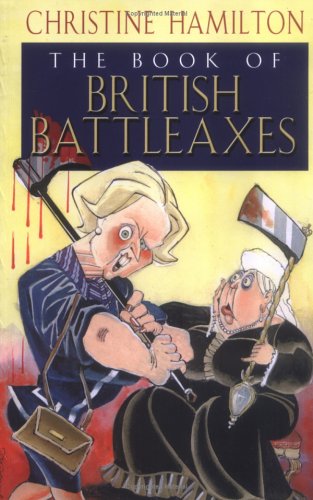 The term battleaxe has been used since 1910 when it implied a closely defined type: elderly, resentful, vociferous and certainly no beauty. Here Christine Hamilton presents a banquet of belligerent British belles who, for one reason or another, exude the indomitable spirit that is the hallmark of the battleaxe, and yet who defy that description. Her portraits are admiring and affectionate - a celebration of that special quality that stands certain women apart. The star-studded cast includes Dame Barbara Cartland who when asked if she thought class barriers had broken down, retorted 'Of course they have. If they hadn't, someone like you wouldn't have been interviewing someone like me'; Barbara Woodhouse, famous for her strict approach to both dogs and owners, who once said of the royal Corgis 'I have seen them on a station platform exhibiting dreadful impatience'; no-nonsense Claire Raynor who said of herself 'I'm five foot nine and built like a bus. What can I do about it? Bugger all.' and Dame Irene Ward who on a parliamentary delegation to Nazi Germany in 1936 is said to have exclaimed in stentorian tones to Hitler 'What absolute bosh you are talking!'

1. THE BOOK OF BRITISH BATTLEAXES

3. THE BOOK OF BRITISH BATTLEAXES

4. The Book of British Battleaxes