Items related to TWILIGHT YEARS PARIS IN THE 1930'S

TWILIGHT YEARS PARIS IN THE 1930'S 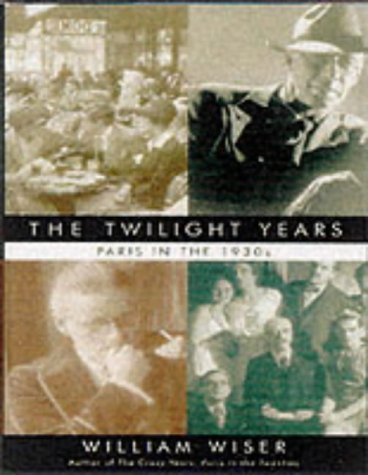 Book Review Paris lost none of its magical allure for artists and expatriates in the 1930s. Jazz orchestrated Parisian nights, surrealism flourished, haute couture reinvented itself. James Joyce redefined modern literature with Finnegans Wake and at her cabaret Josephine Baker redefined the derriere. At salons and galleries, palaces and cafes, Henry Miller, Helena Rubinstein, Anais Nin, Coco Chanel, Salvador Dali, Elsa Schiaparelli, T.S. Eliot, and Katherine Anne Porter joined illustrious exiles of the twenties like Gertrude Stein, Sylvia Beach, Pablo Picasso, Janet Flanner, and Man Ray. The Twilight Years tells their story, and the city's. Jauntily narrated and lavishly illustrated with a superb selection of period photographs, it chronicles the decade that continued to foster the brilliant creative revolution of the expatriate era - an era that ended with perhaps the grimmest event in modern French history: the fall of Paris and the Nazi occupation in 1940.

"'This book is alive with people and events, and the style has the velocity of a high-speed train.' New York Times"

William Wiser is the author of the award-winning novels K and Disappearances, among others, and of the widely acclaimed The Crazy Years: Paris in the Twenties. He lives in Colorado.