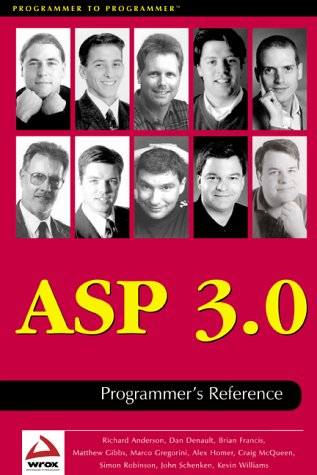 ASP 3.0 Programmer's Reference relates to ASP 3.0 as included with Windows 2000. However, because ASP is now a core part of so many Web-oriented features within Windows, this book covers a far wider area than just the ASP syntax, properties, methods and events. Windows 2000 is a big operating system, in other words, it is functionally rich and bundled with numerous applications and services that enable you and your applications to do lots of different things with very little effort. For example, with Windows 2000 you can use IIS5 as your web server, you can use Active Directory to share enterprise-wide information, you can Message Queue Services to create applications that can work in a disconnected or a connected mode etc. Therefore, a properly equipped ASP programmer needs to have more than just ASP reference material close at hand to function effectively in this environment. ASP 3.0 Programmer's Reference also covers Components, Active Directory, XML, ADO, Messaging and Collaboration Services, VBScript, JScript and much more making it the complete ASP programmer's desktop companion.

More than just a reference, this is a detailed guide to Active Server Pages 3.0, which is the version that ships with Windows 2000. It is aimed at experienced developers, although you do not need previous knowledge of ASP itself. There is some overlap with Professional Active Server Pages 3.0, another Wrox title which shares some of the same authors. The difference is the reference-style presentation, which documents the properties, methods and events of each ASP component while also providing extensive commentary and examples. A strong feature is that examples are given in both VBScript and JScript, whereas most ASP books use only VBScript. The early chapters introduce ASP and cover the all-important intrinsic objects. Next come the Scripting objects, including the handy Dictionary object as well as file-handling features. The third section tackles Active Server Components such as Browser Capabilities and Content Linking. ActiveX Data Objects are a critical part of ASP, and the detailed treatment here includes chapters on Data Shaping and OLAP (Online Analytical Processing) as well as core objects like Connections and Recordsets.

That accounts for around two-thirds of the book. The later chapters are particularly valuable, covering advanced features such as transactions with COM+ (formerly called MTS), message queuing, using XML from ASP, programming the Active Directory with ADSI (Active Directory Services Interface), and taking advantage of CDO (Collaboration Data Objects). There are also chapters on Indexing Services, security, and optimizing performance. A number of useful tables are presented as appendices, and there is a detailed index.

Although the situation is improving, strong ASP titles remain thin on the ground. This one is packed with tips, explanations and examples, and the hands-on experience of the authors is always evident. --Tim Anderson

Online discussion of the topics in this book available at Wrox's P2P site.

ASP is now the pivotal technology used by hundreds of thousands of today's web sites worldwide. Based upon the technique of combining HTML with server side scripting to create web pages dynamically, ASP along with IIS provide a significant amount of infrastructure and services that are needed to create simple or advanced intranet, internet and extranet web applications with rich user interfaces and functionality.

Book Description Paperback. Condition: Very Good. The book has been read, but is in excellent condition. Pages are intact and not marred by notes or highlighting. The spine remains undamaged. Seller Inventory # GOR001356529

Book Description Paperback. Condition: Very Good. ASP 3.0 Programmer's Reference This book is in very good condition and will be shipped within 24 hours of ordering. The cover may have some limited signs of wear but the pages are clean, intact and the spine remains undamaged. This book has clearly been well maintained and looked after thus far. Money back guarantee if you are not satisfied. See all our books here, order more than 1 book and get discounted shipping. Seller Inventory # 7719-9781861003232

Book Description Paperback. Condition: Very Good. This book is in very good condition and will be shipped within 24 hours of ordering. The cover may have some limited signs of wear but the pages are clean, intact and the spine remains undamaged. This book has clearly been well maintained and looked after thus far. Money back guarantee if you are not satisfied. See all our books here, order more than 1 book and get discounted shipping. Seller Inventory # 6545-9781861003232

Book Description Condition: Good. A+ Customer service! Satisfaction Guaranteed! Book is in Used-Good condition. Pages and cover are clean and intact. Used items may not include supplementary materials such as CDs or access codes. May show signs of minor shelf wear and contain limited notes and highlighting. Seller Inventory # 1861003234-2-4

Book Description First Edition. Programmer's reference This is a used book. The book is bowed through shelf wear. Small patch of dust-staining to the top edge of the text-block. The internal pages are clean and the binding is sound. A solid copy. International customers, please enquire about shipping due to the weight of this book. Thank you. Seller Inventory # t897