St John Of The Cross Poems

St John Of The Cross 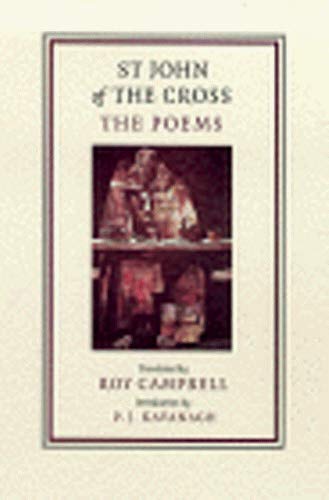 Paperback. Pub Date: 2000 Pages: 96 in Publisher: Harvill Press Introduction by PJ Kavanagh. A finely produced. Bilingual edition poems of these celeated. Rejoice. My love with me And see us both reflected in your beauty: By mountain -slope and lea Where purest rills run free. We'll pass into the forest undetected.-from Songs Between the Soul and the idegroom St. John of the Cross. a sixteenth-century Spanish Carmelite monk. has long been regarded as one of the greatest of Christian mystics. His intensely fervent and profound poems are a reflection of his own unique mystical experiences. which required nothing less than total surrender to the love of God. They are presented here in a beautifully produced. fine-paper edition. both in the original Spanish versions and on facing pages in Roy Campbell's celeated English translation. Campbell was an intense admirer of all things ...

"Roy Campbell has recreated the extraorinary subtlety of the music of the original in an English verse worthy of it, and that climbs from aspiration to ecstasy as if it were itself the poem" (Guardian)

Lavishly praised by Jorge Luis Borges, Roy Campbell's translation of the poems by St John of Cross, a 16th-century Spanish monk and one of the great lyrical mystics, stands as the definitive English edition.