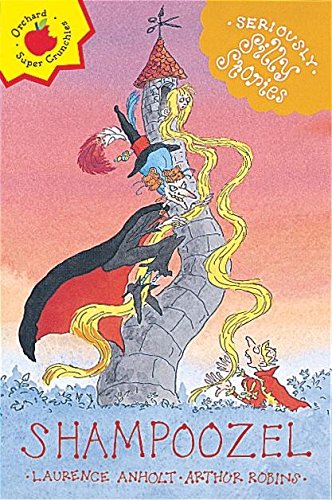 Seriously Silly Stories are fun and wacky reworkings of traditional fairy tales. In Shampoozel, read about a girl with lovely long hair and the Bad Hair Witch, creator of amazing hairstyles.

Laurence and Catherine Anholt live and work in a house and studios on top of a hill above the sea in Devon. They started making picture books in 1984 when their first daughter was born. Since then they have made more than 200 classic picture books, which are published all over the world in more than 30 languages.

Their titles range from their Orchard picture book series which include Babies Love Books and Billy and the Big New School; to Laurence's self-illustrated Anholt's Artists series, an introduction to great artists for young children, which include Camille and the Sunflowers. Laurence also collaborates with his friend, the illustrator, Arthur Robins on the bestselling Seriously Silly Stories, which include the Nestlé Smarties Gold Award winner Snow White and the Seven Aliens.

The Anholts' books have won many awards and are frequently featured on television and radio. Babies, Babies, Babies is listed in The Sunday Times 100 Modern Classics. Laurence was included in the Independent on Sunday's Top 10 Children's Authors in the UK and was described as 'one of the most versatile authors writing for children today'.

Laurence was brought up mainly in Holland where he developed a lasting passion for art. He then went on to study Fine Art for eight years, finishing with a Master's Degree from the Royal Academy of Art in London.

The Anholts have been closely involved with a number of literacy schemes such as the UK Government funded Bookstart scheme, which encourages parents to share books with babies from the earliest possible age. Their work has taken them inside Buckingham Palace and Downing Street on many occasions. Recent projects include a full-scale stage musical in Korea.

Laurence and Catherine have three grown up children: Claire works for the UN in New York, Tom Anholt is a painter living in Berlin and Maddy is an actor based in London.

Laurence's favourite things include, 'my lovely family, travelling to wild places and anything to do with art'. The best way to relax? 'A long soak in a warm book.'

Book Description Paperback. Condition: Good. The book has been read but remains in clean condition. All pages are intact and the cover is intact. Some minor wear to the spine. Seller Inventory # GOR003026806

Book Description Orchard Books 23/03/2000, 2000. Condition: Very Good. Shipped within 24 hours from our UK warehouse. Clean, undamaged book with no damage to pages and minimal wear to the cover. Spine still tight, in very good condition. Remember if you are not happy, you are covered by our 100% money back guarantee. Seller Inventory # 6545-9781860396519

Book Description Orchard Books 23/03/2000, 2000. Condition: Very Good. This book is in very good condition and will be shipped within 24 hours of ordering. The cover may have some limited signs of wear but the pages are clean, intact and the spine remains undamaged. This book has clearly been well maintained and looked after thus far. Money back guarantee if you are not satisfied. See all our books here, order more than 1 book and get discounted shipping. . Seller Inventory # 7719-9781860396519