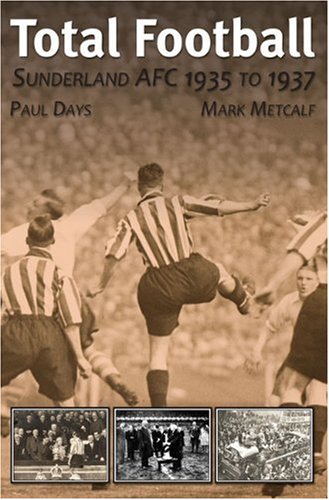 This title features a unique period in Sunderland AFC's history when they were Football League Champions, FA Cup Winners and Charity Shield Winners. It also features review coverage in local press and football media; Strong support from Sunderland AFC POS available. 'Arsenal are now second to Sunderland' screamed the "Sunday Sun" headline on 7 December 1935. In 1935/36 the Red and Whites won their sixth English Football League Championship, a feat they have not managed to repeat since. The drama of that historic season is recreated in Total Football through the original contemporary match reports and rare original photographs from the archives of Sunderland supporters. The highs and lows of the League campaign are recalled in detail, including the tragic death of goalkeeper Jimmy Thorpe, to whom the book is dedicated, after a match against Chelsea at Roker Park. Thorpe's grief-stricken team mates went on to play their hearts out for the rest of the season, eventually hammering Birmingham City 7-2 at St Andrews to capture the League title. In 1936/37 Sunderland lifted the FA Cup at Wembley for the first time in the club's history after their dramatic progression through the rounds included two replays against an exciting young Wolves side. The Wearsiders also claimed the FA Charity Shield, bringing yet more silverware back to Roker Park. The team's achievements in 1935-37 prompted legendary Liverpool manager Bill Shankly, who played for Preston North End against Sunderland in the 1937 FA Cup Final, to remark: In many ways the Sunderland team of 1937 played the same brand of Total Football as the great Holland team of the 1970s. Sunderland heroes Raich Carter, perhaps the finest player ever to take the field for the club, and Bobby Gurney, still the club's highest-ever goalscorer, helped to make the team of 1935-37 the greatest in the land. The story of that era is told here for the first time, and is sure to inspire a new generation of Sunderland supporters.

PAUL DAYS has been a Sunderland fan since 1974. He was the first editor of Sunderland AFC's Official website for 7 years, has written for the club's official magazine The Legion of Light and has contributed to A Love Supreme (ALS), the nationally acclaimed and award winning football fanzine for Sunderland AFC. He has had many books published on his beloved club. MARK METCALF has been a Sunderland season ticket holder for well over a quarter of a century and during that time has missed very few matches, home and away. He is the author of the successful biography on Charlie Hurleyy and is currently writing a history of the 1960 FA Cup due for publication in 2010. Mark works as a freelance journalist for many regional and national magazines and newspapers.