Items related to Images of Glasgow 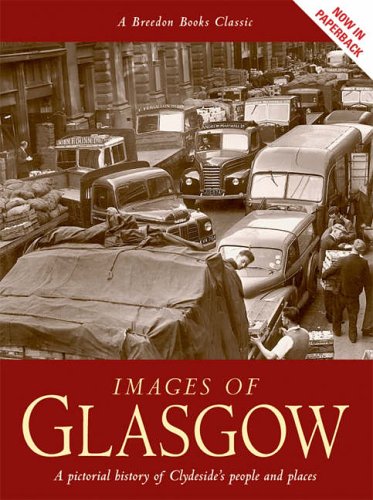 They lifted a veil of industrial grime and discovered a place of incredible beauty - Glasgow, once the Second City of the Empire, now facing a very different future, chosen as UK City of Architecture and Design in 1999. But for all the prospect of a brand-new century, the main thrust of this prestigious book is a nostalgic look at the Dear Green Place as it used to be. This is Glasgow in all the black-and-white reality of a city and a river which built the most famous ships in the world, and locomotives too. The particular energy of its people set a rhythm of vibrancy symbolised in the clatter of the shipyard, the clank of the tramcar, the roar of a rivalry between Rangers and Celtic and the beat of the Big Band at Barrowlands or the Locarno where Glaswegians were hailed as the greatest dancers on earth. Through it all came world-class spectacles, from the Empire Exhibition of 1938 (Scotland's largest-ever event) to the Garden Festival of 1988 and the City of Culture Extravaganza of 1990. Everyone from Pavarotti to Sinatra was here.

With a new sense of pride, Glasgow was cleaning up the magnificence of its Victorian architecture, building a concert hall with the royal accolade and emerging as a centre of opera, ballet and orchestral excellence. The seal of international recognition came with the opening of the Burrell Exhibition which guaranteed a new-found flow of tourists from all parts of the world. The tapestry of Glasgow had become broader in scope and richer in colour, a contrast of past and present, so vividly portrayed in this very special book.

Book Description Paperback. Condition: Very Good. The book has been read, but is in excellent condition. Pages are intact and not marred by notes or highlighting. The spine remains undamaged. Seller Inventory # GOR003024169

Book Description Breedon Books Publishing Co Ltd, 2005. Paperback. Condition: Very Good. Very Good: a copy that has been read, but is in excellent condition. Pages are intact and not marred by notes or highlighting. The spine remains undamaged. Most items will be dispatched the same or the next working day. Seller Inventory # wbb0014248974

Book Description DB Publishing, 2005. Condition: Good. Ships from the UK. Former Library book. Shows some signs of wear, and may have some markings on the inside. Seller Inventory # GRP82633365