Items related to A History of Sheffield

Hey, David A History of Sheffield

A History of Sheffield 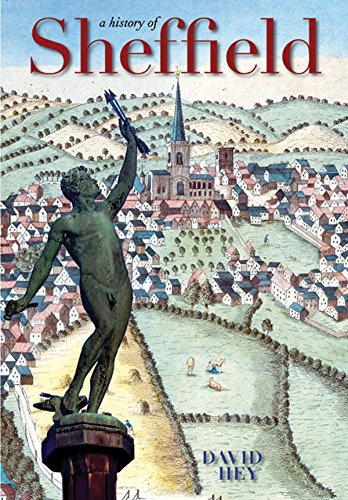 The city of Sheffield has long been synonymous with cutlery and steel, and most previous books have understand ably concentrated on the momentous changes which industrialisation brought to the area over the last two hundred years. This was a period when manufacturing handicrafts and industry were central to almost every aspect of life and work in the area. The figures are astonishing: as early as the seventeenth century three out of every five men in the town worked in one branch or another of the cutlery trades and, in all, Sheffield had a smithy to every 2.2 houses; a hundred years later there were as many as six watermills per mile on rivers such as the Don, Porter and Rivelin, driving a wide range of industrial machinery and processes. Local innovations included Old Sheffield Plate, crucible steel and stainless steel. During the mid-nineteenth century 60 per cent of all British cutlers worked in the Sheffield area, and the region manufactured 90 per cent of British steel, and nearly half the entire European output; small, specialised workshops producing a wide range of goods such as edge-tools and cutlery existed side by side with enormous steel factories (it has been estimated that in 1871 Brown's and Cammell's alone exported to the United States about three times more than the whole American output). Yet, as David Hey shows, the city's history goes back way beyond this. Occupying a commanding position on Wincobank, high above the River Don, are the substantial remains of an Iron Age hillfort, built to defend the local population. Celts, Vikings and Anglo-Saxons came and left a legacy recalled in many local names. By the twelfth century William de Lovetot had built a castle at the confluence of the Don and the Sheaf, and it is likely that it was he who founded the town of Sheffield alongside his residence. A century later can be found the first reference to a Sheffield cutler, so industry in the area can be said to be at least 700 years old, and no doubt stretches back even further. Highly respected local historian David Hey has written a fine, up-to-date history of Sheffield. His excellent text is complemented by over 300 illustrations, many in full colour. The text of this new edition has been updated to 2010, and contains new illustrations.

This fascinating book scores highly because of its detailed references to the social aspects of the city s history. These are woven into all the chapters, giving it the human touch many history books seem to lack. "

David Hey (right) is Emeritus Professor of Local and Family History at the University of Sheffield, where he taught in the Division of Adult Continuing Education. His recent books include the two acclaimed county histories, A History of Yorkshire: 'County of the Broad Acres' (Carnegie, 2005) and A History of Derbyshire (Carnegie, 2008). He is currently writing a major new History of England for Carnegie, due out in 2011. Professor Hey is pictured here in 2005 holding a Sheffield-made Bowie knife, while Ken Hawley, to whom this book is dedicated, is holding a large Sheffield-made chisel.

1. A history of Sheffield

2. A History of Sheffield

Book Description Carnegie Publishing Ltd, 2010. Soft cover. Condition: Very Good. 3rd Edition. The pages are bright, unmarked, in very good condition and tightly bound. No creasing on the spine or covers which have only light signs of previous ownership/storage. Mailed the same or next working day in a cardboard book box. Seller Inventory # 408.39

3. A History of Sheffield

4. A History of Sheffield

Book Description imusti, 2012. Paperback. Condition: VERY GOOD. Pages are intact and are not marred by notes or highlighting, but may contain a neat previous owner name. The spine remains undamaged. Supplemental materials are not guaranteed with any used book purchases. Seller Inventory # 1859361986_abe_vg