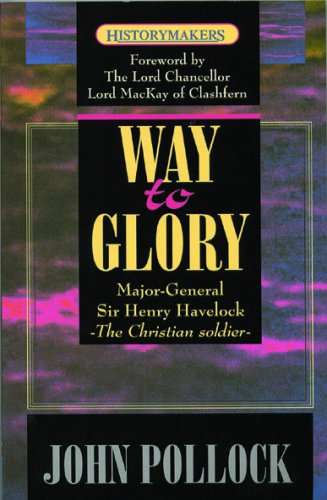 In over thirty engagingly written and illustrated pieces Peter Jeffery applies the good news of the Christian faith and teaching in a way you and others will love reading about it. These tracts are supplied on three formats PDFs US letter size for folding and UK A4 size for folding and as HTML text so you can load them on your website. Purchase of this CD licenses you or your church or your Christian organization to print and distribute as many of these tracts as you wish and to publish and circulate them electronically by email or on the world wide web.

...John Pollock's biographies are invariably meticulously researched, godly and well-earthed. Way to Glory is no exception. It is probably the most inspiring biography of a British evangelical Christian officer that has ever been written. It can be recommended without reserve.

"This is not a book for the squeamish: horrible crimes were committed in the Mutiny and terrible vengeance was exacted. But above all the blood and thunder, no reader can fail to find inspiration in Havelock's example."

The late John Pollock, an award-winning biographer, had a flair for telling a dramatic story. He used this talent to write many biographies including ones on D. L. Moody and Major General Sir Henry Havelock.

Book Description Christian Focus Publications Ltd, United Kingdom, 2001. Paperback. Condition: New. Revised ed. Language: English. Brand new Book. Most English towns have a 'Havelock Street', 'Square' or 'Road' - why? The answer as to why townsfolk should enthusiatically rename their streets after a Victorian General is to be found in this gripping biography of Henry Havelock, the hero of the Siege of Lucknow.Henry Havelock was a respected soldier in the British army in India, where he served for most of his career. He was a pioneer in the giving away of bibles to soldiers and organising bible studies.A grateful nation recognised him with a knighthood and a statue at Trafalgar Square in the centre of London. When he died, from the wounds he received at Lucknow, a public holiday was declared and the nation mourned. Seller Inventory # AAZ9781857922455