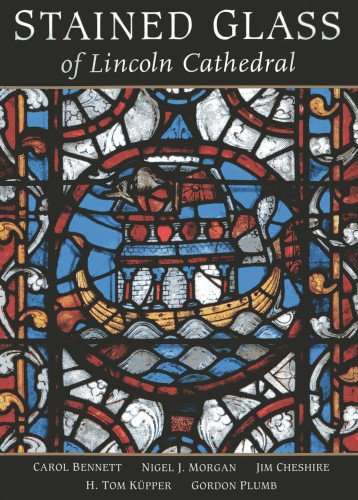 Expressing the compelling beauty and majesty of Lincoln Cathedral in words is as elusive as grasping the colours cast on the floor and pillars by the light shining through its stained-glass windows. Lincoln Cathedral's breathtaking stained glass is one reason many believe this to be the finest Gothic cathedral in the British Isles. Much of its medieval glass has been lost, but what remains is the most important collection of English early thirteenth-century glass after Canterbury Cathedral. The north transept Dean's Eye is outstanding as an early and very large rose window of c. 1220. The Victorian glazing programmes feature the leading firms of the day, as well as the gifted amateurs Augustus and Frederick Sutton, who made the great west window, depicting Old Testament Kings and Prophets in the style and colours of medieval glass. The best examples of twentieth-century glass are four striking Archangel windows by Harry Stammers. Given the existence of so many treasures, it is surprising that Lincoln's stained glass is hardly known. Until now there has been no book published on the subject as a whole. 'The Stained Glass of Lincoln Cathedral' celebrates the range and quality of Lincoln's glass, combining new scholarly perspectives with sumptuous illustrations.

Carol Bennett MA is Education Officer at Lincoln Cathedral, where she organises lectures, concerts, readings and study days. She is an adult education lecturer and author on architectural history, and a member of the Lincoln Diocesan Advisory Committee. Nigel Morgan MA, PhD, is Emeritus Honorary Professor of the History of Art at the University of Cambridge. He is a distinguished medieval art historian, whose books include Early Gothic Manuscripts, 1190-1250 and 1250-1285 (2 vols, 1982 and 1988) and two monographs on the Lambeth (1990) and Douce (2007) Apocalypses. Dr Jim Cheshire is Senior Lecturer in the History of Art and Material Culture at the University of Lincoln. He has worked as a curator at the Victoria and Albert Museum and more recently for the exhibition Tennyson Transformed (Lincoln, 2009). H. Tom Küpper joined the Lincoln Cathedral Gazing Department in 1993 and has been Team Leader since 1999. As an Accredited Conservator Restorer (ACR) he has presented a number of papers in Britain, Europe and the USA on the restoration and conservation of historic stained glass. The Revd Gordon Plumb BA is a specialist stained-glass photographer who regularly provides images for publications on medieval British stained glass. He is Historic Stained Glass Adviser to the Lincoln Diocesan Advisory Committee.

Book Description Condition: Very Good. Shipped within 24 hours from our UK warehouse. Clean, undamaged book with no damage to pages and minimal wear to the cover. Spine still tight, in very good condition. Remember if you are not happy, you are covered by our 100% money back guarantee. Seller Inventory # 6545-9781857597745

Book Description Condition: Very Good. This book is in very good condition and will be shipped within 24 hours of ordering. The cover may have some limited signs of wear but the pages are clean, intact and the spine remains undamaged. This book has clearly been well maintained and looked after thus far. Money back guarantee if you are not satisfied. See all our books here, order more than 1 book and get discounted shipping. . Seller Inventory # 7719-9781857597745

Book Description Condition: Good. A+ Customer service! Satisfaction Guaranteed! Book is in Used-Good condition. Pages and cover are clean and intact. Used items may not include supplementary materials such as CDs or access codes. May show signs of minor shelf wear and contain limited notes and highlighting. Seller Inventory # 1857597745-2-4