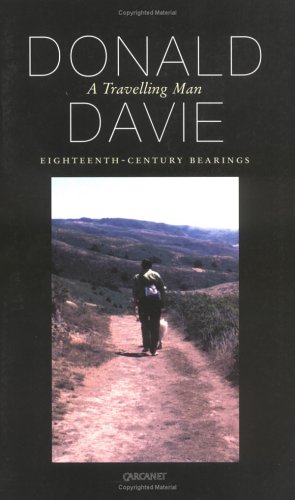 Donald Davie was a great critic of the 18th century, its literature, its religion and politics, its culture in the broadest sense, because he took his creative bearings from it. This is what makes him such an unusual poet; and this is why, when he writes about Berkeley, or Swift, or Goldsmith, Smart, Cowper, Doctor Johnson, the Augustan Lyric, the hymn writers, the Dissenters, diction and irony, he holds our attention the way a great teacher (which he was) can do. For him the act of critical engagement is a challenge to all the vigours of the mind and spirit, and he makes accessible areas of our culture which Romanticism and lazy reading have fenced off as dull, closed areas. The fact is that Romanticism draws its energies not only from reaction against the 18th century, but also from a deep engagement with it. Many of his earliest essays, especially those written in Dublin, the city of Berkeley, Goldsmith and Swift, were rooted in the 18th century and its abiding gifts.

Born in Barnsley in 1922, DONALD DAVIE served in the Navy and studied at Cambridge, becoming Professor of English at Essex, and later at Stanford and Vanderbilt. In 1988 he returned to England where he died in 1995. Carcanet's uniform Collected Works of Donald Davie includes Collected Poems (1990), Under Briggflatts (1989), Slavic Excursions (1990), Studies in Ezra Pound (1991), Older Masters (1992), Church, Chapel, and the Unitarian Conspiracy (1995) and Poems and Melodramas (1996). Purity of Diction in English Verse and Articulate Energy (one volume) are also available from Carcanet.