Items related to The Singer And The Sea: Winter of the World series

Rohan, Michael Scott The Singer And The Sea: Winter of the World series

The Singer And The Sea: Winter of the World series 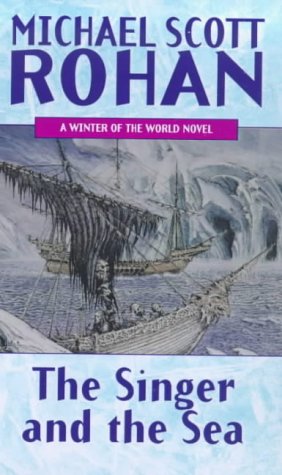 When Gille Kilmorsson, a master smith and a musician, saves a Southern merchant ship from the savagery of the corsairs, he takes as his only reward an old musical instrument. But it is an instrument with an ancient, magical past and the spirits it conjures up soon lead Gille and his companion, Olvar, on an amazing voyage of adventure and discovery. A voyage in which they must confront not only the mysteries of the sea but also a ruthless, barbaric tribe intent on massacring an innocent people ...

Michael Scott Rohan's "Winter of the World" fantasies began with an epic, Wagnerian 1986-8 trilogy set in prehistoric Ice Age days, with the life-hating Ice opposed by other, kinder Powers who favour humanity. The Castle of the Winds (1998) takes place a millennium earlier, and the stand-alone The Singer and the Sea features the now grown-up apprentices of that book's Mastersmith--randy Gille the singer and the mighty Olvar. Gille's wild fling with a minor female Power of sea and air sets him longing for sea travel. His and Olvar's resulting trade voyage to the rich South goes astray as they follow a plea for help, to find the island refuge of a tough but innocent tribe harried by murderous black longships of the Ice. Desperate sea-skirmishes ensue, with the outnumbered merchants managing to give the enemy some ingenious surprises. Even with Southern naval reinforcements, though, our heroes seem helpless against the might of the main black fleet--but Gille unwittingly has contacts in high places, or deep ones, and finds himself singing for his life in the ocean-god's undersea court. Rohan strikes a stirring high-fantasy note as--with Gille's song as catalyst--the chief Powers of sea and fire at last begin to move directly against the Ice. The story ends satisfyingly. --David Langford

1. The Singer And The Sea: Winter of the World series

Book Description ORBIT, 1999. Paperback. Condition: Fair. A readable copy of the book which may include some defects such as highlighting and notes. Cover and pages may be creased and show discolouration. Seller Inventory # GOR003613780

2. The Singer And The Sea: Winter of the World series

Book Description Orbit, 1999. Paperback. Condition: Good. A slight tear to tbhe cover. A slight tan to the page edges. Good condition is defined as: a copy that has been read but remains in clean condition. All of the pages are intact and the cover is intact and the spine may show signs of wear. The book may have minor markings which are not specifically mentioned. Most items will be dispatched the same or the next working day. Seller Inventory # mon0016020455

3. The Singer and the Sea (Winter of the World)

4. The Singer and the Sea (Winter of the World)

5. The Singer and the Sea Winter of the World Volume 5

6. Singer and the Sea

Book Description ORBIT, 1999. Paperback. Condition: Good. Item is in good condition. Some moderate creases and wear. This item may not come with CDs or additional parts including access codes for textbooks. Might be an ex-library copy and contain writing/highlighting. Photos are stock pictures and not of the actual item. Seller Inventory # DS-1857237412-3

7. The Singer and the Sea (Winter of the World)

Book Description ORBIT, 1999. Condition: Good. A+ Customer service! Satisfaction Guaranteed! Book is in Used-Good condition. Pages and cover are clean and intact. Used items may not include supplementary materials such as CDs or access codes. May show signs of minor shelf wear and contain limited notes and highlighting. Seller Inventory # 1857237412-2-4