Items related to Black Mischief, Scoop, The Loved One And The Ordeal...

Waugh, Evelyn Black Mischief, Scoop, The Loved One And The Ordeal Of: Gilbert Pinfold

Black Mischief, Scoop, The Loved One And The Ordeal Of: Gilbert Pinfold 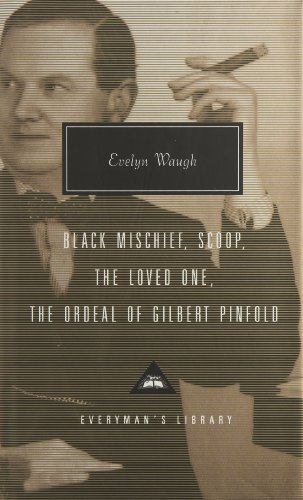 (Book Jacket Status: Jacketed) In honor of the hundredth anniversary of Evelyn Waugh's birth, four of the master's most wickedly scathing comedies are here brought together in one volume. "Black Mischief "is Waugh at his most mischievous-inventing a politically loopy African state as a means of pulverizing politics at home. In "Scoop," it is journalism's turn to be drawn and quartered. "The Loved One "(which became a famously hilarious film) sends up the California mortuary business. And "The Ordeal of Gilbert Pinfold "is a burst of fictionalized autobiography in which Pinfold goes mad, more or less, on board an ocean liner. Here in four short-very different-novels are the mordant wit, inspired farce, snapping dialogue, and amazing characters that are the essence of everything Waugh ever wrote.

"As a writer of satiric and comic stories, Evelyn Waugh remains unmatched among modern writers." -"New York Times Book Review" "["Black Mischief" is a] brilliant comic-opera tale [that gives wide] scope to his gift for creating astounding absurdities. The book is continuously funny." -"New York Times" "The fun is fast and furious...Stop once to think of probability, and the illusion would vanish; but take ["Black Mischief"], as the author wrote it, in a fit of high spirits as an uproarious lark, and nothing better can or could be done." -"Saturday Review" "["Scoop"'s] urbane malice [is] as bright and sharp as tin; it is not only delightful but true." -"The New Republic" "Never before have the majestic themes of love and death been so delicately perverted to absurdity . . . ["The Loved One" is] a work of art, as rich and subtle and unnerving as anything its author has ever done." -"The New Yorker" "It is Mr. Waugh's greatness as a satirist that, although his characters are in themselves completely improbable, they are not impossible, for they are merely logical extensions of all too real human beings." -"The Spectator"

1. Black Mischief, Scoop, the Loved One, the Ordeal of Gilbert Pinfold