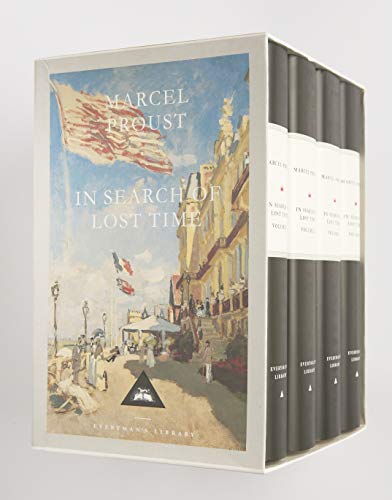 Generally agreed to be the greatest novel of the twentieth century – and possibly any other – Proust’s masterpiece is here presented in the latest revision to the classic Scott Moncrieff translation. On the surface a traditional Bildungsroman describing the narrator’s journey of self-discovery, this huge and complex book is also a panoramic and richly comic portrait of France in the author’s lifetime, and a profound meditation on the nature of art, love, time, memory and death. But for most readers it is the characters of the novel who loom the largest: Swann and Odette, Monsieur de Charlus, Morel, the Duchesse de Guermantes, Françoise, Saint-Loup and so many others – Giants, as the author calls them, immersed in Time.

Marcel Proust was born in Auteuil in 1871. In his twenties he became a conspicuous society figure, frequenting the most fashionable Paris salons of the day. After 1899, however, his suffering from chronic asthma, the death of his parents and his growing disillusionment with humanity caused him to lead an increasingly retired life. He slept by day and worked by night, writing letters and devoting himself to the completion of A la recherche du temps perdu. He died in 1922 before publication of the last three volumes of his great work.

1. In Search of Lost Time