Items related to The Last Chronicle Of Barset (Everyman's Library... 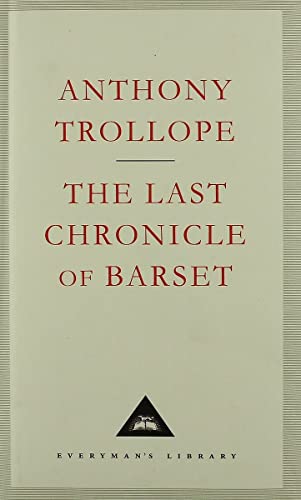 The concluding episode in Trollope's magnificent sequence of six Barsetshire novels narrates the trials of Joseph Crawley, the obsessive rector of Hogglestovk, as he struggles to clear his name from accusations of theft. But Crawley's story is only one thread in a complex tapesty which includes favourite characters from earlier novels in this delicately planned finale to the sequence. Four of the Barset novels - THE WARDEN, BARCHESTER TOWERS, DOCTOR THORNE AND FRAMLEY PARSONAGE already appear in Everyman. THE SMALL HOUSE AT ALLINGTON will be published in 1996

Anthony Trollope's enduring popularity is extraordinary, but once you start listening to them it is easy to see why Naxos Audiobooks confidently set out on the marathon enterprise of recording all six of his Barchester novels in unabridged form 125 hours in all. The further into the series you get, the more you appreciate the continuous development of its rich gallimaufry of characters. Last Chronicle begins dramatically: I can never bring myself to believe it, John , cries Mary, the Barset attorney's daughter, when she hears that the penurious and pitifully proud curate Josiah Crawley is accused of stealing a cheque. In fact, the plot is rather drawn out, but the journey to its completion is rich in incident, rounded off by news of the series most loveable character, Warden Harding. - --Christina Hardyment, The Times

Trollope's final Barsetshire novel brings back many characters in an audiobook that combines mystery and romance. Narrator David Shaw Parker uses his rich, resonant voice to establish and differentiate those characters through tone and accent, giving the impression of a full-cast performance. He excels naturally at male voices; women's voices are not as distinctive and are occasionally unconvincing. He effectively establishes a personality for the story's narrator ingratiating, tolerant, amused who is also a character. Occasional slowness and repetition in the text are offset by Shaw Parker's acting ability, his expression of sense and feeling, and his ability to imbue his reading with emotional warmth. The story, and Shaw Parker's performance, are deeply involving. Most listeners will find themselves caught up and entertained throughout this long audiobook. --W.M., AudioFile

Anthony Trollope was born on 24 April 1815 and attended both Harrow and Winchester schools. His family were poor and eventually were forced to move to Belgium, where his father died. His mother, Frances Trollope, supported the family through writing. Trollope began a life-long career in the civil service with a position as a clerk in the General Post Office in London - he is also credited with later introducing the pillar box. He published his first novel, The Macdermots of Ballycloran in 1847, but his fourth novel, The Warden (1855) began the series of 'Barsetshire' novels for which he was to become best known. This series of five novels featuring interconnecting characters spanned twenty years of Trollope's career as a novelist, as did the 'Palliser' series. He wrong over 47 novels in total, as well as short stories, biographies, travel books and his own autobiography, which was published posthumously in 1883. Trollope resigned from the Post Office in 1867 and stood for Parliament as a Liberal, though he was not elected. He died on 6 December 1882.

1. The Last Chronicle of Barset