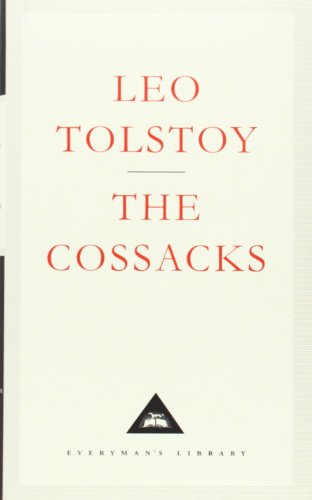 A brilliant short novel based on Tolstoy's early life as a soldier in the Caucusus, THE COSSACKS has all the energy and poetry of youth while at the same time foreshadowing the great themes of Tolstoy's later years. A young officer finds himself living among tribesmen on the borders of southern Russia. In depicting his experience, Tolstoy explores the birth and death of love, the transience of life, the love of honour and the pain of war, all portrayed amidst the wild and magnificent landscape of the mountains and described in exquisite detail.

When you think of Tolstoy, you most likely think of his epic novels, like Anna Karenina or War and Peace. You probably don't think of his shorter pieces like The Cossacks, a shorter novella that is considered to be the author's autobiography. The book centers around an unhappy Muscovite nobleman named Dmitri Olénin who joins the army in search of adventure and purpose in his life. He winds up in the Caucasus and is intrigued by the geography and the simple people who live there. Along the way, he discovers himself and falls in love for the first time, and in turn discovers the pain love can bring. We meet a cast of characters that includes the manly Cossack soldier Lukashka, the beautiful Cossack girl Maryanka, and the larger-than-life grandfather figure, Uncle Yeroshka, each of who play an important role in the life education of Olénin. Since this has always been one of my favorite books, I was curious to see how it translated into the audiobook format. The voice work is done by Jonathan Oliver, an English actor who has over a decade of experience reading audiobooks for the blind. At first, I was a little thrown by his English accent, as I know many Russians personally, and I always lent a Russian accent to The Cossacks characters in my mind. But as the story progressed, I got used to Oliver's accent and it became very natural sounding, as he took on the life of the characters. He also did a wonderful job of changing out his vocal style as each different character spoke, making it easy to tell who was speaking as the conversations took place. I especially liked his portrayal of Uncle Yeroshka, the colorful old man of the Cossack village who takes Olénin under his wing. Oliver's voice bellows and rings out with intensity, bringing the character to life in incredible fashion. Oliver is obviously very familiar with the story as well as Tolstoy in general, and he adds touches here and there to make the story even more special. For example, he reads the descriptive sections with the same enthusiasm as the speaking roles, painting a perfect picture of the Cossack village and the activities of its inhabitants as they go about daily life. He also sings their songs with a convincing air, staying in character the whole time. As far as classic literature goes, this one is an easy listen. It is not too long, and the story moves quickly, filled with adventure and a touch of innocent romance. Plus, it is a great introduction to Tolstoy without getting lost in the epic length of some of his other works. Highly recommended. --MISH MASH, http://mishmashmusic.blogspot.com/

Leo Tolstoy was born in central Russia on 9 September 1828. In 1852 he published his first work, the autobiographical Childhood. He served in the army during the Crimean War and his Sevastopol Sketches (1855-6) are based on his experiences. His two most popular masterpieces are War and Peace (1864-69) and Anna Karenina (1875-8). He died in 1910.