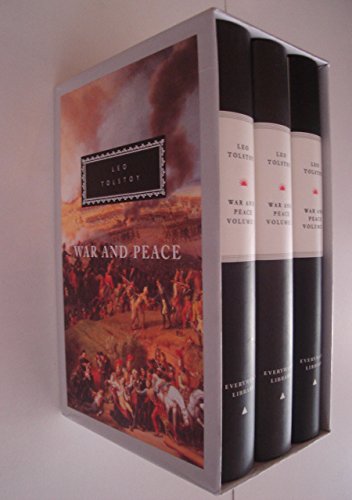 This is a three-volume boxed set of Tolstoy's historical chronicle of Russia's struggle with Napoleon. The novel is an affirmation of life itself, focusing on the lives of individuals and the physical reality of human experience and its bewildering complexity.

Leo Tolstoy was born in central Russia on 9 September 1828. In 1852 he published his first work, the autobiographical Childhood. He served in the army during the Crimean War and his Sevastopol Sketches (1855-6) are based on his experiences. His two most popular masterpieces are War and Peace (1864-69) and Anna Karenina (1875-8). He died in 1910.

Among the great novels of the world, 'War and Peace' has long held pride of place because it fulfills, in its seamless interweaving of the historical and the personal, and its genius in registering the entire scale of human life, all the promise latent in the art of fiction itself.