Items related to The Code Book: The Science of Secrecy from Ancient...

Singh, Simon The Code Book: The Science of Secrecy from Ancient Egypt to Quantum Cryptography

The Code Book: The Science of Secrecy from Ancient Egypt to Quantum Cryptography 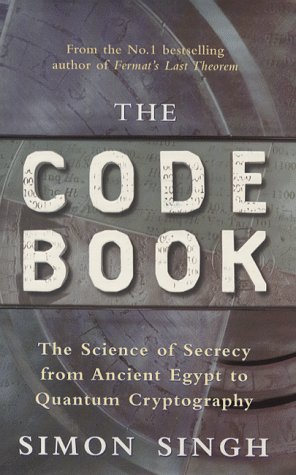 From the bestselling author of ‘Fermat’s Last Theorem’, ‘The Code Book’ is an enthralling history of codes and code-breaking from Egyptian puzzles to modern-day computer encryptions.

Since humans began writing, they have been writing in code. This quest for secrecy has often changed the course of history. In ‘The Code Book’, Simon Singh offers a sweeping view of the subject of encryption as well as its more dramatic effects on the outcome of wars, monarchies and individual lives. Included in this fascinating book is the story of Mary Queen of Scots, trapped by her own code and put to death by Queen Elizabeth. Also recounted is the history of the Beale Ciphers, created in the early 19th-century to obscure the location of a treasure in gold, buried somewhere in Virginia. Singh also traces the monumental improvements in code-making and -breaking brought on by World Wars I and II, the outcomes of which could have been very different without the brilliance of the Allied code breakers. Now, in the Information Age, the possibility of a truly unbreakable code looms large and cryptography has become one of the major debates of our times. Simon Singh investigates the challenges to personal privacy that technology and the ways we communicate today have upon everyday lives. Dramatic, compelling, and remarkably far reaching, this is a book that will forever alter your view of history, what drives it, and how private that email you just sent really is.

With their inextricable links to history, mystery and war, codes and ciphers offer a rich seam of material for any author. The relative dearth of non-technical books on the subject may be a reflection of its pretty technical foundations, which compel hard decisions about what to include and what to gloss over. Few are better qualified to take on the challenge than Simon Singh, the particle physicist turned science writer whose book Fermat's Last Theorem, recounting the dauntingly complex story behind the proof of this mathematical conjecture, deservedly became a No. 1 bestseller.

The Code Book contains many fascinating accounts of code-breaking in action, from its use in unmasking the Man in the Iron Mask and the defeat of the Nazis to the breaking of a modern cipher system by a world-wide army of amateurs in 1994. It is especially good on the most recent developments, such as quantum cryptology and the thorny civil liberties issues raised by the advent of very secure cipher systems over the Internet. But Singh's mathematical prowess sometimes gets the better of his journalistic instincts, leading to technical descriptions that unnecessarily disrupt the narrative flow. So buy it-- and have a shot at the 10,000 pound mystery cipher--but be prepared to skip. --Robert Matthews

‘A fascinating meander through the centuries; replete with tales of intrigue, political chicanery, military secrecy and academic rivalry.’ The Times

Code Book, The: The Secret History of Codes and Code-breaking

Code Book, The: The Secret History of Codes and Code-breaking