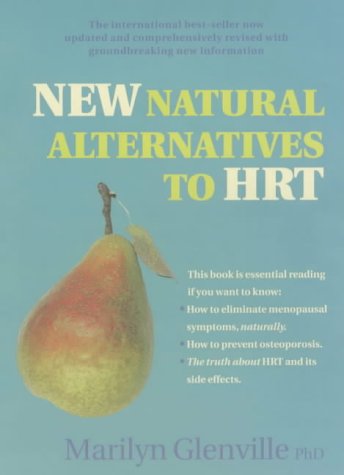 This book is about choices - knowing what is available and being able to use that information. Dr Marilyn Glenville is sympathetic to women who are not happy or are unsure about the recommendations that their doctor has given them. If you discover that you can control menopausal symptoms naturally, why would you want to take HRT? Given the right tools, diet, nutrition and lifestyle, your body can adapt to this change naturally, efficiently and comfortably without the risks and side-effects of HRT. Since the first edition of 'Natural alternatives to HRT' was published in 1997, a wealth of new knowledge has greatly altered our knowledge of HRT. This edition takes account of those changes. It features a plan of action and also looks at the safety of HRT and new designer HRTs.

Barbara Hall from Luxembourg has bought up some very important points and these are one of the main reasons that up to 60% of new information have been added to ‘The New Natural Alternatives to HRT’ since the first internationally best selling book, ‘Natural Alternatives to HRT ‘, was published in 1997. (Over 500,000 copies have been sold and translated into 20 languages so I must have said something right!).

There is so much confusion and hype around HRT and hormones that women need to know what they are taking. There are synthetic HRTs on the market and there are so called ‘natural’ hormones that are available. The ‘natural’ ones are chemically identical to those that women produce in their own bodies and so have been misleading classed as ‘natural’. But it is important for women to know that these so-called ‘natural’ hormones are not natural in the everyday understanding of the word natural. They are powerful pharmaceutical hormones that are produced in a laboratory and in the UK they are available only on prescription and rightly so as they are recognised by the UK’s Medicines Control Agency as drugs. If women choose to take these drugs (and they are drugs) they are still taking Hormone Replacement Therapy (whether it is oestriol, oestradiol or progesterone) they are just not taking a synthetic hormone. This is explained in detail in ‘The New Natural Alternatives to HRT!
’ so that women can make an informed and independent choice about whether they want to take these laboratory produced ‘unnatural hormones’ or not.

The whole focus of New Natural Alternatives to HRT is to show women that they do not need to take powerful hormones (synthetic or so called ‘naturally’ derived) into their bodies to go through the menopause, which is a natural stage of their lives.

The book also specifically warns women against taking soya or isoflavone supplements or even industrially- processed soya because of the concerns I have about the possible oestrogenic effects of these products. These concerns have arisen through the many hours of scientific research and review of the medical literature I have done while researching the current material for this book and from my clinical practice where I personally see hundreds of women every year.

My aim is for women to go through the menopause naturally, using naturally grown foods, organic where possible, that many cultures have used for centuries (some soya but mainly fermented traditional foods) and to use other natural remedies such as herbs to counter the hot flushes etc.

The reader may be interested to know that I am a nutritionist specialising in women’s health and work in a gynaecology clinic in London seeing women who can’t take HRT for a number of reasons e.g. breast cancer, uncomfortable side effects etc and those women with a history of breast cancer also cannot take the so called ‘natural’ hormones either, it is contraindicated because of the risks involved. I am an independent practitioner with no connection to the soya industry or any other industry for that matter. I find that the people who get upset the most with my writings are usually those who have not read my book properly or have a vested interest in a product, service or industry where I have brought to light some adverse research or cast some doubt about the ‘supposed’ benefits of that interest. For this I make no apologies.

I write it as I find it, objectively and as the facts of my research dictate. I write without regard to any sacred cows in any industry, whether that is pharmaceutical, medical or nutritional industries. In ‘The New Natural Alternatives to HRT’, I explain all aspects of the story, the medical, pharmaceutical and the natural. I believe that women, everywhere, want to know and deserve to know the truth about what is being offered to them so that they can then make intelligent and informed decisions.

Since the first edition of "Natural alternatives to HRT" was published in 1997, a wealth of new knowledge has greatly altered our knowledge of HRT, this edition takes account of those changes. It features a plan of action and looks at the safety of HRT and new designer HRTs.