Items related to WORLD WITHIN (BRONTES): Brontes at Haworth - A Life...

WORLD WITHIN (BRONTES): Brontes at Haworth - A Life in Letters, Diaries and Writings (Illustrated Letters) 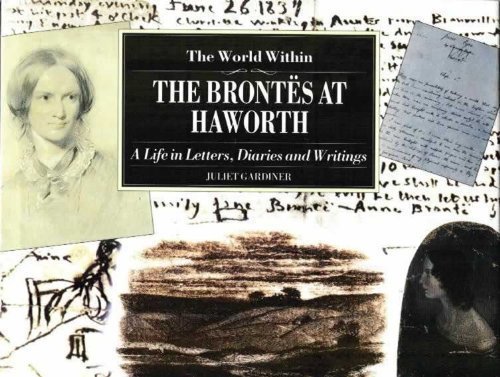 One of a series which also includes "My Dear Cassandra" (featuring the correspondence of Jane Austen) and "Paper Darts" (Virginia Woolf), this book maps both the real world of the Brontes at Haworth Parsonage, high up on the Yorkshire moors, and the worlds they spun for themselves in their writing and story-telling. Wherever possible it uses the words of Charlotte, Emily and Anne Bronte, their brother Branwell and their stern father, the Reverend Patrick Bronte, which are found in their letters to each other, the secret diary of Emily and Anne, and the correspondence between the Brontes as writers, and literary London. These are supplemented by the observations of those few people, such as Mrs Gaskell, who knew them and their works of poetry and fiction. Excerpts from all these sources are juxtaposed with the Brontes' own oils, watercolours and sketches of family and friends, pets and moorland scenes, and tiny drawings made to illustrate the chronicles of their imaginary childhood worlds. Other illustrations include facsimile letters and diary entries, paintings by Victorian artists and pictures of the artefacts which were in daily use at the Parsonage, which is today a place of pilgrimage for visitors from all over the world. Juliet Gardiner's other books include "The People's War", "What is History Today?" and "Over Here: the GIs in Wartime Britain".

1. The World Within: The Brontes at Haworth (The Illustrated Letters)