Items related to Bosworth 1485: Last charge of the Plantagenets: No....

Gravett, Christopher Bosworth 1485: Last charge of the Plantagenets: No. 66 (Campaign) 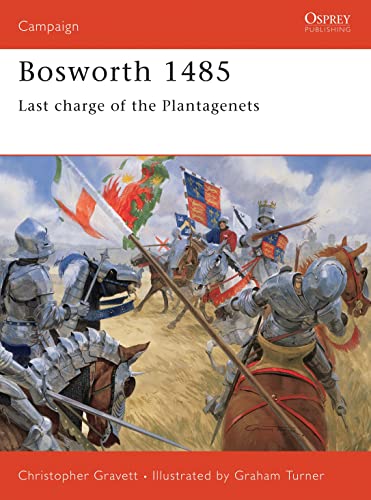 Chris Gravett is assistant curator of armour at the Tower Armouries, and a recognised authority on the arms, armour and warfare of the medieval world. His previous Osprey titles include Elite 17 Knights at Tournament, Warrior 1 Norman Knight 950-1204 AD and Campaign 13 Hastings 1066.

Graham Turner was born in Harrow in 1964, the son of the respected aviation artist Michael Turner, with whom he also shares an interest in motorsport illustration. Graham has been a freelance artist since 1984; specialising in historical and military subjects, particularly of the medieval period, and has illustrated several Osprey titles including Campaign 44 Pavia 1525, Warrior 20 The British Redcoat (2) 1793-1815, Men-at-Arms 310 German Medieval Armies 1000-1300 and 320 Armies of the Caliphates 862-1098. He lives with his wife and two children in Buckinghamshire.

The Battle of Bosworth, the last great battle of the War of the Roses, established the House of Tudor on the throne. This work aims to cut through the myth and propaganda to detail the course of this pivotal campaign.

Book Description Softcover. Condition: New. Osprey Campaign Series - Middle Ages (500 to 1500 A.D.) Bosworth 1485 (Revised Edition) (MINT/New)Manufacturer: OspreyProduct Line: Campaign Series - Middle Ages (500 to 1500 A.D.)Type: SoftcoverCode: OSPCAM066Copyright Date: 1999Author: Christopher GravettPage Count: 96Please review the condition and any condition notes for the exact condition of this item. All pictures are stock photos. The condition of the item you will receive is MINT/New. Our grading system is explained in the terms of sale section of our bookseller page. Please feel free to contact us with any questions. Product Description:The battle of Bosworth effectively put an end to the dynastic struggle known as the Wars of the Roses (1455-1485). Guiding the reader from the campaignâ s origins to its aftermath, and covering the commanders and forces of King Richard III and Henry Tudor, this is a complete treatment of one of the most important events in English history. Shakespeare was to immortalize the battle and Richardâ s death in Richard III, and the life and reign of the last Plantagenet have sparked centuries of debate. Christopher Gravett cuts through myth and propaganda as he clearly details the course of this pivotal campaign. Seller Inventory # 2148708218

Bosworth 1485: Last Charge of the Plantagenets

Book Description Condition: New. Turner, Graham (illustrator). Dieser Artikel ist ein Print on Demand Artikel und wird nach Ihrer Bestellung fuer Sie gedruckt. The Battle of Bosworth, the last great battle of the War of the Roses, established the House of Tudor on the throne. This work aims to cut through the myth and propaganda to detail the course of this pivotal campaign.&Uumlber den Autor. Seller Inventory # 597118220