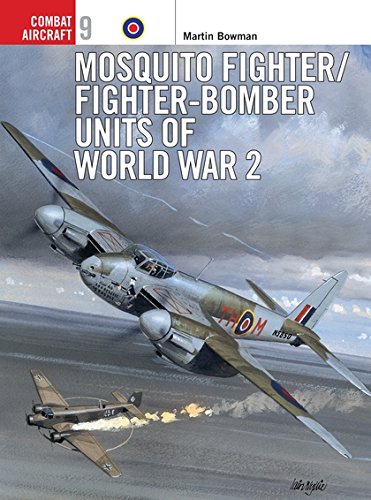 Norwich-based Martin Bowman has written several volumes on the Mosquito, plus countless works on the USAAF. An airbrush artist with years of experience, Chris Davey has become Osprey's principal illustrator of RAF aircraft, having produced the profiles for over a dozen books since 1994. His most recent work includes Aircraft of the Aces 38 and Combat Aircraft 31. He is particularly adept at 'big' aircraft like the Halifax and Sunderland.

This second volume in a trilogy of titles devoted to de Havilland's "wooden wonder" focuses on the Mosquito fighter variants and their users. Crews explain the tactics they used and their are scale drawings of all the Mosquito variants.

Book Description Bloomsbury Publishing PLC, United Kingdom, 1999. Paperback. Condition: New. Language: English. Brand new Book. The second volume in the trilogy of Combat Aircraft titles devoted to de Havilland's 'wooden wonder', this book focuses on the Mosquito fighter/fighter-bomber variants, and their users. From its earliest development phase, the aircraft was considered as much a fighter as a bomber, and this was duly reflected when the original 1940 Air Ministry order for 50 Mosquito bombers was modified to 20 bombers and 30 fighters. This volume is the first of its kind exclusively dedicated to the fighter/fighter-bomber variants of de Havilland's classic World War II (1939-1945) aircraft. Seller Inventory # BTE9781855327313