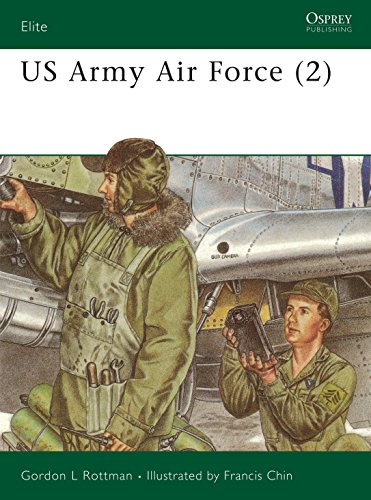 While the most conspicuous components of the US Army Air Forces in World War II were the air units, there were also hundreds of ground units and organisations. Besides assigned military personnel the AAF also employed thousands of civilians. Many unique outfits were designed to meet the AAF's special needs. Uniformed civilians also possessed a variety of unique uniforms and insignia. These general issue and specific uniforms are the subject of this volume by one of Osprey's most experienced authors, Gordon L. Rottman, whose detailed text is backed by plenty of contemporary photographs and 12 full page colour plates by Francis Chin.

Gordon L Rottman entered the US Army in 1967, volunteered for Special Forces and completed training as a weapons specialist. He was assigned to the 7th Special Forces Group until reassigned to the 5th Special Forces Group in Vietnam in 1969-70. He entered the Texas Army National Guard in 1974 and was the full-time Operations Sergeant of 2nd Bn., 143rd Inf., 36th Airborne Brigade until 1980, when he assumed a similar position with Co. G (Ranger), 143rd Inf. Reverting to part-time status in 1986, he is now the Opposing Forces Group Operations Sergeant in the Army Reserve's 75th Manoeuvre Area Command in Houston. He is a civilian contract Special Operations Forces Intelligence Specialist at the Army's Joint Readiness Centre, Ft Polk.

Francis Chin is one of Osprey's newest artists. He lives and works in Alberta, Canada.