Items related to Studies of Political Thought: From Gerson to Grotius,... 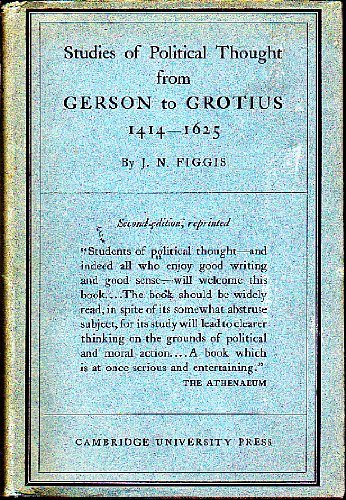 John Neville Figgis (1866-1919), author of "The Divine Right of Kings" and "Churches in the Modern State", here constructs a concise history of early political thought. First published in 1907, Figgis's account was written very much under the influence of F.W. Maitland's pluralism. In this it contrasts with Figgis's earlier book, "The Divine Right of Kings", which was largely informed by the Austinian theory of sovereignty. "Gerson to Grotius" emphasizes the way in which modern political ideas developed from struggles within the late-medieval Church to bring about more decentralized forms of government. This reprint is from the second edition of 1916.

John Neville Figgis (1866–1919) was a historian, political theorist and monk, his writings extensively influenced the history of ideas and prefigured the theological developments of the 1920s. First published in 1916, this second edition of a 1907 original provides six chapters on various aspects of political thought from between 1414 and 1625.

Book Description Thoemmes Press, 1998. Paperback. Condition: New. Hardly any sign of use with No Writing in text. Ships with tracking the same or next business day from New Haven, CT. We fully guarantee to ship the exact same item as listed and work hard to maintain our excellent customer service. Seller Inventory # 10141724