Items related to Ruskin, Turner and the Pre-Raphaelites

Ruskin, Turner and the Pre-Raphaelites 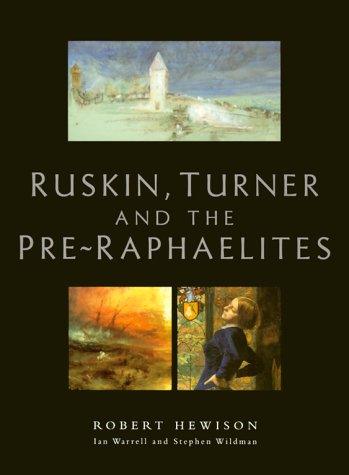 Remembered mainly for his devotion to Turner, and later the Pre-Raphaelites, a fear of pubic hair, the libel case brought by Whistler, and the late spiral into manic depression, Ruskin was art critic, cultural critic, artist, writer, patron and social politician--as irreverent as he was earnest.

"For myself, I am never satisfied that I have handled a subject properly till I have contradicted myself at least three times".

The centenary of his death has seen the release of the second and final volume of Tim Hilton's already classic biography John Ruskin Vol 2: The Later Years, and John Batchelor's John Ruskin: No Wealth But Life. This publication coincides with the exhibition at Tate Britain.

In order to "re-spin" Ruskin as the first advocate of contemporary art, Hewison draws parallels between recent developments in new media for artists and the mid-19th century art world of technological change. However, Ruskin was without doubt also a man of his time in his ideas, both social and artistic.

What allowed Ruskin to champion both Turner and the Pre-Raphaelites was their challenge to the status quo and a shared quest for Truth; he found moral resolution in the aesthetic synthesis of natural fact and symbolic truth.

Ruskin's drawings and watercolours--"I could have done something if I had not books to write"--catch the eye on the page. Lover of Venice and the Gothic, as well as animals and rock formation, his scrupulous draughtsmanship speaks as eloquently of his vision as his words. Inevitably, the 39 volumes of his written output may gather dust on library shelves, but Hewison's catalogue is a judicious and recommended introduction to this protean, magnificently flawed man and the art which flowed from or with him. --David Vincent

The Ruskin, Turner and the Pre-Raphaelites exhibition at the Tate Britain marks the centenary of Ruskin's death. This catalogue examines his role as a contemporary critic by bringing together many of the masterpieces that he wrote about, and exploring his personal links with some of the painters.

1. Ruskin, Turner, and the Pre-Raphaelites

4. Ruskin, Turner, and the Pre-Raphaelites

Book Description Tate, Uk, 2000. Soft cover. Condition: New. This is a NEW softcover from the Tate, and it is in near-MINT / PRISTINE condition. And, as one has come to expect, anything from the Tate is wonderful. Seller Inventory # 101012

5. Ruskin, Turner, and the Pre-Raphaelites