Items related to The Unquiet Bones: The First Chronicle of Hugh de Singleton,... 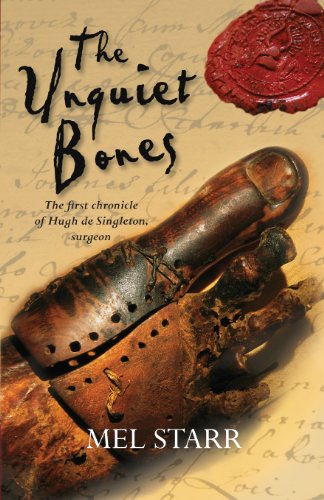 A medieval whodunnit set in Bampton, Oxfordshire during the plague years and featuring a newly qualified surgeon.

"I would almost have to assume that Mel Starr had a previous life in 14th-century England, so incredibly realistic are his descriptions of life then and his dialogue. The author brings it to life with panache. Starr's lavish use of Medieval English adds a saucy flavoring to his tale. You will enjoy this excellent excursion into the past!" -- Dr Paul Maier

Hugh of Singleton, fourth son of a minor knight, has been educated as a clerk, usually a prelude to taking holy orders. However, feeling no certain calling despite a lively faith, he turns to the profession of surgeon, training in Paris and then hanging out his sign in Oxford. A local lord asks him to track the killer of a young woman whose bones have been found in the castle cess pit. She is identified as the impetuous missing daughter of a local blacksmith, and her young man, whom she had provoked very publicly, is in due course arrested and sentenced at the Oxford assizes. From there the tale unfolds, with graphic medical procedures, droll medieval wit, misdirection, ambition, romantic distractions and a consistent underlying Christian compassion.