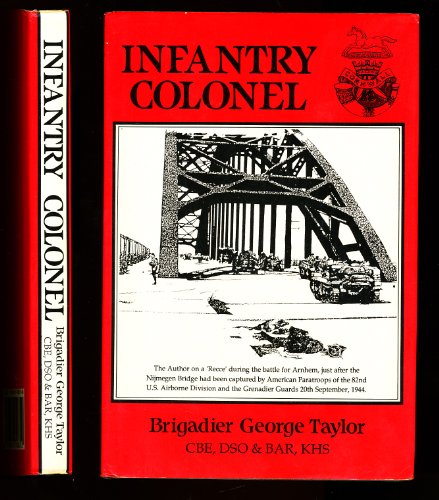 George Taylor is a quite remarkable man. A keen rugby player, he represented the Barbarians, the Army XV and Lancashire and would no doubt have played for England had he not been posted to Bermuda which interrupted his representative playing career. It was in the Caribbean that he began to develop his skills as a military tactician. Lieut. Taylor spent much time in the garrison military library, studying the writing of Clausewitz, Liddell Hart, General Fuller, Wavell, the military tactics of Stonewall Jackson, and the official historians of World War 1.He gained practical experience in pre-war service in the Canal Zone in Egypt under such excellent soldiers as General Burnett Stuart, Tim Pile (later commander of Britain's wartime anti-aircraft defences) and Harold Franklyn, his colonel, whose adjutant was Freddy de Guingand, later to become Montgomery's Chief of Staff. Monty commanded a battalion in the Brigade, and, says, Brigadier Taylor, "I came out of a good stable".He was able to apply much of this military knowledge in Normandy, Holland and Germany.Though belonging to the West Yorkshire Regt. he was, on landing in Normandy, Second in Command of the 1st Battalion, The Worcestershire Regt. George Taylor was given command of the 5th Battalion Duke of Cornwall's Light Infantry, after they had been decimated on the notorious Hill 112, the "Corner Stone" of the battle. He was their third C.O. in as many weeks. By a system of constant training, understanding, communication and kindness, Colonel Taylor was to shape from the shattered remnants one of the most efficient fighting forces in the whole campaign. He himself was to receive two DSO's during the fighting, including one for leading the epic dash through the German lines in an heroic effort to reach the pinned down 1st Airborne Division at Arnhem. He was to command the Battalion till the end of the war.

Book Description Images Booksellers and Distributors, 1990. Condition: Good. A+ Customer service! Satisfaction Guaranteed! Book is in Used-Good condition. Pages and cover are clean and intact. Used items may not include supplementary materials such as CDs or access codes. May show signs of minor shelf wear and contain limited notes and highlighting. Seller Inventory # 1854210858-2-4

Book Description Paperback. Condition: Very Good. The book has been read, but is in excellent condition. Pages are intact and not marred by notes or highlighting. The spine remains undamaged. Seller Inventory # GOR003411112