Items related to Sherlock Holmes: The Novels: The Complete and Unabridged...

Sherlock Holmes: The Novels: The Complete and Unabridged Novels 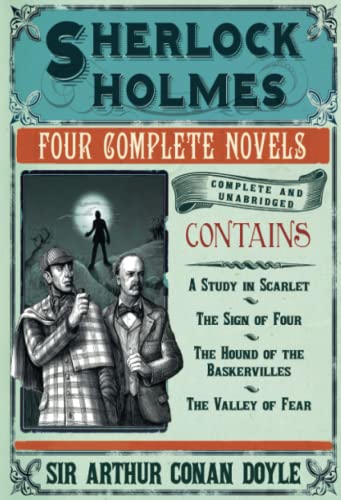 'I have my eye on a suite in Baker Street...' So said Sherlock Holmes when he and Dr Watson first met. Their humble address at 221B Baker Street has since become almost as famous as the great detective himself, the incredible popularity of Sherlock Holmes' adventures never wavering over the last 120 years. Dr Watson's initial encounter with Holmes came in Sir Arthur Conan Doyle's first Sherlock Holmes novel "A Study in Scarlet", first published in 1887. The tale involves the investigation of a grisly murder in foggy South London that casts a sinister shadow all the way across the Atlantic to the sun-scorched plains of Utah. "The Sign of Four", the second novel, was first published in 1890. This is a tale of a damsel in distress, intrigue in colonial India, stolen treasure, a baffling murder and four despicable ex-convicts. Perhaps the most famous of all Sherlock Holmes stories was the third novel, "The Hound of the Baskervilles". Featuring bizarre behavior and mysterious deaths on the Devon moors, the tale first appeared in print in 1901. In 1914, the final Sherlock Holmes novel, "The Valley of Fear", saw Holmes unraveling the mystery of a dead man's mistaken identity while facing up to his old foe, Professor Moriarty. Although many more of Holmes' cases were recorded in short stories, these were the only novels. Each is faithfully reproduced in this one epic volume, complete and unabridged, providing an ideal introduction to Sherlock Holmes for the uninitiated as well as a nostalgically familiar collection for long-established Holmes fans.

Sir Arthur Ignatius Conan Doyle was born in Edinburgh, Scotland, in 1859. He studied medicine at Edinburgh University and it was as a student that he first began writing fiction. He created his most famous character, Sherlock Holmes, while working as a doctor in Portsmouth and would go on to become a prolific author writing science fiction, historical novels, romances, plays and poetry as well as his ground-breaking detective adventures.

1. Sherlock Holmes: The Novels: The Complete and Unabridged Novels

Book Description Paperback. Condition: Very Good. The book has been read, but is in excellent condition. Pages are intact and not marred by notes or highlighting. The spine remains undamaged. Seller Inventory # GOR004963611

2. Sherlock Holmes: The Novels: The Complete and Unabridged Novels

Book Description Prion, 2013. Condition: Good. Rep Una. Ships from the UK. Former Library book. Shows some signs of wear, and may have some markings on the inside. Seller Inventory # GRP94629782

Book Description Carlton Publishing Group, 2013. Condition: Good. A+ Customer service! Satisfaction Guaranteed! Book is in Used-Good condition. Pages and cover are clean and intact. Used items may not include supplementary materials such as CDs or access codes. May show signs of minor shelf wear and contain limited notes and highlighting. Seller Inventory # 1853758884-2-4