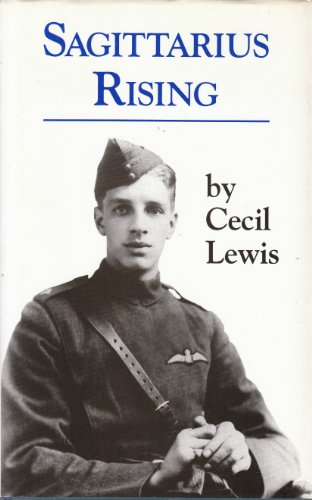 Generally regarded as one of the classic memoirs of World War I, this is a personal account of the air fighting that took place. The author, Cecil Lewis, was a British airman and also a founder-member of the BBC.

If you want to read one book which best captures the heroic infancy of flying, then Sagittarius Rising is it. Forget St Exupery, Lindbergh or even Richard Hillary. Cecil Lewis got there before any of them, and in this magical memoir summed up the terrible beauty of flying, and fighting the first air war, waged in the skies above the Western Front. --Nigel Jones, BBC History Magazine

Sagittarius Rising is his stirring, often moving, account of his years with the corps, fighting on the Western Front. The vivid descriptions of dog-fights (including an encounter with the Red Baron) and the exhilaration of flight transcend Boy's Own Paper banality through his poignancy and lyrical depth. --The Times

This is a book everyone should read. It is the autobiography of an ace, and no common ace either. The boy had all the noble tastes and qualities, love of beauty, soaring imagination, a brilliant endowment of good looks . . . this prince of pilots . . . had a charmed life in every sense of the word . . . he is a thinker, a master of words, and a bit of a poet. --George Bernard Shaw

Cecil Lewis distinguished himself in action with eight victories throughout WWI and was awarded the MC. After the war he became a flying instructor in China and later achieved fame as one of the founders of the BBC, and as a respected playwright. He died in 1997.

Book Description -. Hardcover. Condition: Very Good. Sagittarius Rising This book is in very good condition and will be shipped within 24 hours of ordering. The cover may have some limited signs of wear but the pages are clean, intact and the spine remains undamaged. This book has clearly been well maintained and looked after thus far. Money back guarantee if you are not satisfied. See all our books here, order more than 1 book and get discounted shipping. Seller Inventory # 7719-9781853671432

Book Description Hardback. Condition: Good. The book has been read but remains in clean condition. All pages are intact and the cover is intact. Some minor wear to the spine. Seller Inventory # GOR002428751

Book Description Presidio Pr 1993-05-01, 1993. Hardcover. Condition: Good. No Jacket. Item is in good condition. Some moderate creases and wear. This item may not come with CDs or additional parts including access codes for textbooks. This may not have a dust jacket. Might be an ex-library copy and contain writing/highlighting. Photos are stock pictures and not of the actual item. Seller Inventory # DS-1853671436-3