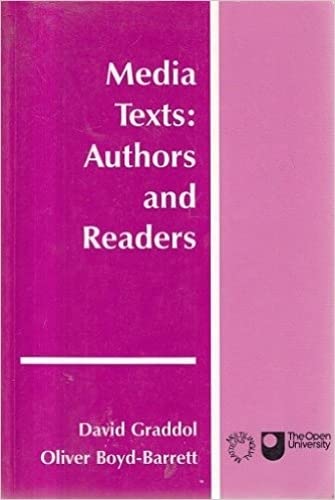 What does TV news have in common with popular romance fiction? Do people interpret the visual element in film and magazines in a similar way to language? This volume provides a broad-ranging and accessible introduction to recent ideas about texts and the complex ways in which they communicate. The collection of articles reflects the growing convergence of linguistic and media analysis. In an introductory section the editors review how linguists have usually approached questions of meaning, examine the contribution linguists have begun to make to media studies, and describe the broader definition of 'text' which has emerged in recent years. Later sections of the book focus on theories of authorship, and how readers construct meaning out of the texts they read. Many of the contributors illustrate postmodern concerns with the historical and social contexts in which texts are produced and used, the ideological and other effects of texts on people, and the impossibility of establishing definite meanings. The anthology should be of great interest to students and researchers in linguistics, media and communication studies, to English teachers who also teach media, and to anyone who wants to know more about the kinds of text which pervade everyday life.

This volume is one of the four readers compiled as part of the course Language and Literacy (Code E825), which is one module of the (UK) Open University MA in Education programme. The collection of papers in this volume is the outcome of a collaboration between two editors: the first a linguist and the second a researcher in media studies. The papers reflect the growing convergence of the two disciplines in their treatment of the text. Analyses of film and television have for some time drawn on linguistics theory - particularly the structuralist model of language provided by Saussure. More recently, linguists have themselves developed and turned their attention to the kinds of text which pervade everyday life, and that has at last generated more principled accounts of the interaction between words and image, and more generally of the interplay and tension between verbal and non-verbal modes of meaning.

This anthology is thus concerned with the complex ways in which texts communicate: at how the verbal and visual element of texts can be theorized within a linguistic framework; and at postmodern approaches which strive to "decanter" the text itself and explore the historical social contexts of their production and consumption. The collection should be of wide interest to students and researchers in linguistics, media studies, and communication. About the Author:

David Graddol and Oliver Boyd-Barrett are members of the Centre for Language and Communications, School of Education at the Open University.