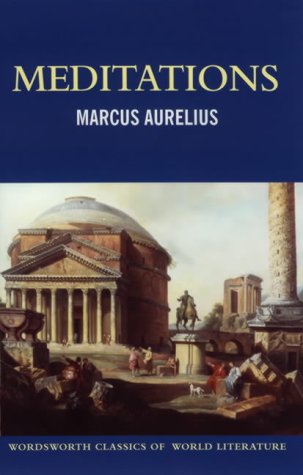 The Meditations of Roman Emperor Marcus Aurelius are a readable exposition of the system of metaphysics known as stoicism. Stoics maintained that by putting aside great passions, unjust thoughts and indulgence, man could acquire virtue and live at one with nature.

An ancient work of spiritual reflection from the Roman emperor, which remains a powerful reminder of how we could live a more dignified life by avoiding deceit, vanity and greed. --OK! Magazine

Meditations is unaffected by time and offers plenty of wisdom. --Irish Examiner

Marcus Aurelius reigned from 161 AD to 180 AD- perhaps the only true philosopher- king in the history of the world. In his MEDITATIONS, a series of notes to himself, he formulated his pantheist Stoic beliefs with a passionate religious conviction. The MEDITATIONS were written day by day, in every situation including war. They often appear to be responses to the stress of supreme power, from the imminent fear of death in battle, to the trials of everyday life. Gregory Hays, the translator, is Assistant Professor of Classics at the University of Virginia.