Items related to The Bluffer's Guide to Poetry: Bluff Your Way in...

The Bluffer's Guide to Poetry: Bluff Your Way in Poetry (Bluffer Guides) 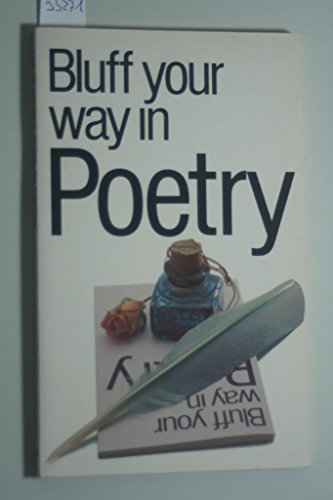 Instantly acquire all the knowledge you need to pass as an expert in the world of poetry and verse (bluffers might be surprised to discover that there is a difference), with The Bluffer s Guide to Poetry. Never again confuse an anapest with a distich, a panegyric with a polemical, or a haiku with someone clearing their throat. Bask in the admiration of your fellow literati as you pronounce confidently on the comparative merits of a rhapsody and an elegy, or a dactyl with a spondee, and effortlessly learn how to hold your own when extolling the sublime gifts of whichever poet you ve decided is the greatest of all. DO SAY Yes, I suppose it s about time I rediscovered (insert name here), although I m afraid that I ve always found him/her a little too deceptive. On the other hand he/she also has a tendency towards the tiresomely reductive. In the past my response to his/her work can only be described as lacklustre...but everybody deserves a second chance. DON T SAY There was a young lady from Bude/ Who went for a swim in the nude/... The Bluffer's® Guides: the 5-million-copy bestselling book series. These short, humorous guides contain all the facts you need to become an instant expert.

Born in Newcastle upon Tyne in 1954, Keith Hann grew up in a household devoted to the music of the two Maxes, Jaffa and Bygraves, but luckily introduced himself to opera shortly before leaving school. Over the last 40 years he has watched the curtain rise on more than 1,000 operatic performances, and waited until it fell on 997 of them. In order to fund this addiction, he has been variously employed as an unsuccessful stockbroker and an incompetent but occasionally entertaining public relations consultant. Decades of skilful bluffing brought him to the brinks of retirement without any lasting romantic entanglements, until a momentary lapse of concentration one evening at Covent Garden led to his marriage at the age of 54, and the subsequent arrival of two children. Keith currently devotes most of his time to not writing a novel and staring forlornly at his bank statements. In consequence, he values his now strictly rationed excursions to opera houses more than ever.

1. BLUFF YOUR WAY IN POETRY (THE BL