Items related to Princes Amongst Men: Journeys With Gypsy Musicians 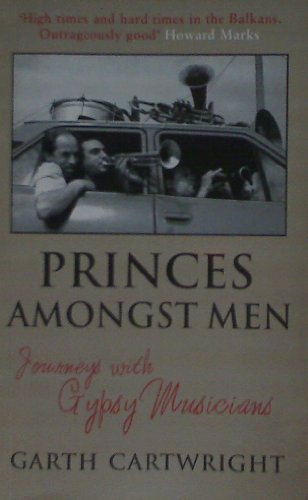 Weaving historical fact, mythic tales and contemporary voices, Princes Amongst Men recounts a Balkan odyssey in search of the secret history and culture of Europe's greatest musicians - the Roma Gypsies. On his wild and affectionate journey, Garth Cartwright wanders through the ruins of post-Communist Serbia and observes Roma refugees from the Kosovo conflict. He attends a Gypsy wedding in Macedonia, conveys the tragedy of Romania in the aftermath of Ceaucescu, scours Skopje for opium, charts the Euro-Asian beauties so prominent in Bulgaria, almost marries a Gypsy princess in Kocani and witnesses the fiery celebrations that mark Ederlezi, the Night of the Gypsies, in an impoverished Bulgarian Gypsy ghetto. Cartwright?s engagement with Gypsy communities bypasses clich? and overturns prejudice to return with the true story of the Gypsies? Balkan blues.

?High times and hard times in the Balkans. Outrageously good.? Howard Marks ?Garth Cartwright is one wise traveller. Drifting across the Balkans he encounters those we call ?Gypsies?, a people much presumed about yet rarely understood. With empathy and wit, eyes and ears open, he describes their beautiful, defiant culture.? Benjamin Zephaniah

Garth Cartwright was born in New Zealand. He left school at 16, tried his hand at professional skateboarding, singing in punk bands, promoting concerts and even had a brief sojourn as a boxer, before turning to writing full time. In 1995 he won the Guardian Music Writing Award. He has written for the Guardian, Telegraph, Independent On Sunday, The Times, Time Out, Uncut, Folk Roots, and a multitude of international publications. He lives in London.

Book Description Paperback. Condition: Used; Good. **SHIPPED FROM UK** We believe you will be completely satisfied with our quick and reliable service. All orders are dispatched as swiftly as possible! Buy with confidence! Greener Books. Seller Inventory # mon0001434530

Book Description Paperback. Condition: Very Good. The book has been read, but is in excellent condition. Pages are intact and not marred by notes or highlighting. The spine remains undamaged. Seller Inventory # GOR001213510

Book Description Condition: Good. Ships from the UK. Former library book; may include library markings. Used book that is in clean, average condition without any missing pages. Seller Inventory # GRP25923049

Book Description Condition: Good. Good condition. A copy that has been read but remains intact. May contain markings such as bookplates, stamps, limited notes and highlighting, or a few light stains. Seller Inventory # K08A-02213

Book Description Condition: Good. A+ Customer service! Satisfaction Guaranteed! Book is in Used-Good condition. Pages and cover are clean and intact. Used items may not include supplementary materials such as CDs or access codes. May show signs of minor shelf wear and contain limited notes and highlighting. Seller Inventory # 1852428775-2-4

Book Description Paperback. Condition: Very Good. Item is in very good condition. If supplemental codes/CDs for textbooks are required please contact us prior to purchasing as they may be missing. Photos are stock pictures and not of the actual item. Seller Inventory # DS-1852428775-2