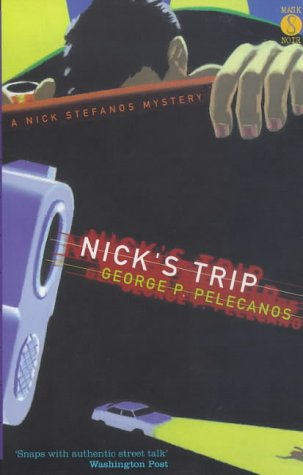 'This is the real thing - an urban nightmare of hopelessness, greed, betrayal, and get-back, kick-ass revenge...A hell of a book' Booklist 'Snaps with authentic street talk and with a switch-hitting plot...the novel has something important to say about trust and treachery' Washington Post 'The kind of book you are always hoping to find but rarely do' James Sallis 'An even more promising follow-up to Pelecanos' highly recommended first novel, A Firing Offense...He is adept at avoiding the dreary cliches used by the current crop of Hammett and Chandler wannabees' New Mystery Nick Stefanos, having earned his P.I. license, quickly discovers that snapping photos of unfaithful husbands does not make for a fulfilling job. Tending bar one night at the Spot, Nick is visited by his high-school friend, Billy Goodrich. Billy's wife is gone. Nick agrees to find her. And with that first step, he sets out on a one-way path that takes him through a sewer of theft, intrigue and love.

The private eye business is in a slump, and Nick Stefanos is keeping bar. It stops him drinking while at work, and gives him time to ask about the stabbing of a gay reporter. When a request to find a missing wife comes from an old friend, and we are promptly sidetracked into flashback city with an account of a speed-and-booze fuelled teenage jaunt around the Southland, it is clear that this is one of those elegies for friendship that are part of the Chandler tradition. Things are going to end badly, and they do; along the way, though, Pelecanos introduces us to some jauntily rough-edged characters and Nick applies intelligence, sensitivity and legwork to the puzzles before him. The picture of the slums of Washington DC and of the seedy roadhouses and country bars through which Nick chases the missing April is the right downbeat stuff. What stops this being just a good routine private-eye mystery, though, is Nick; it is partly his endlessly surprising back story and partly the extent to which he is a man on the skids, still not quite accepting that he cannot stay young and uncontrolled forever. --Roz Kaveney

Snaps with authentic street talk and with a switch-hitting plot... has something important to say about trust and treachery (Washington Post)

Book Description Paperback. Condition: Good. Connecting readers with great books since 1972. Used books may not include companion materials, some shelf wear, may contain highlighting/notes, may not include cdrom or access codes. Customer service is our top priority!. Seller Inventory # S_337372403

Book Description Paperback. Condition: Very Good. The book has been read, but is in excellent condition. Pages are intact and not marred by notes or highlighting. The spine remains undamaged. Seller Inventory # GOR002218162

Book Description Paperback. Condition: Fair. A readable copy of the book which may include some defects such as highlighting and notes. Cover and pages may be creased and show discolouration. Seller Inventory # GOR010746987

Book Description Paperback. Condition: Good. The book has been read but remains in clean condition. All pages are intact and the cover is intact. Some minor wear to the spine. Seller Inventory # GOR003059268

Book Description Paperback. Condition: Good. A tan to the page edges/pages . Minor shelf wear Good condition is defined as: a copy that has been read but remains in clean condition. All of the pages are intact and the cover is intact and the spine may show signs of wear. The book may have minor markings which are not specifically mentioned. Most items will be dispatched the same or the next working day. Seller Inventory # wbb0020866266

Book Description Paperback. Condition: Very Good. This book is in very good condition and will be shipped within 24 hours of ordering. The cover may have some limited signs of wear but the pages are clean, intact and the spine remains undamaged. This book has clearly been well maintained and looked after thus far. Money back guarantee if you are not satisfied. See all our books here, order more than 1 book and get discounted shipping. Seller Inventory # 6545-9781852425623