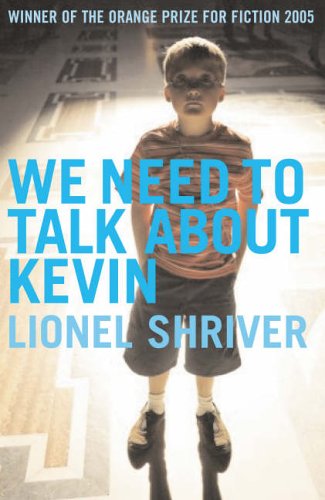 WINNER OF THE ORANGE PRIZE FOR FICTION 2005 Two years ago, Eva Khatchadourian?s son, Kevin, murdered seven of his fellow high-school students, a cafeteria worker, and a popular algebra teacher. Because he was only fifteen at the time of the killings, he received a lenient sentence and is now in a prison for young offenders in upstate New York. Telling the story of Kevin's upbringing, Eva addresses herself to her estranged husband through a series of letters. Fearing that her own shortcomings may have shaped what her son has become, she confesses to a deep, long-standing ambivalence about both motherhood in general and Kevin in particular. How much is her fault? Lionel Shriver tells a compelling, absorbing, and resonant story while framing these horrifying tableaux of teenage carnage as metaphors for the larger tragedy - the tragedy of a country where everything works, nobody starves, and anything can be bought but a sense of purpose.

In fact everybody needs to talk about Kevin. Once in a while, a stunningly powerful novel comes along, knocks you sideways and takes your breath away: this is it... a horrifying, original, witty, brave and deliberately provocative investigation into all the casual assumptions we make about family life, and motherhood in particular (Daily Mail)

This superb, many-layered novel intelligently weighs the culpability of parental nurture against the nightmarish possibilities of an innately evil child (Daily Telegraph 2006-05-06)

A study of despair, a book of ideas and a deconstruction of modern American morality (David Baddiel The Times)

One of my favourite novels... the best thing I've read in years (Jeremy Vine London Magazine)

We Need to Talk About Kevin

WE NEED TO TALK ABOUT KEVIN