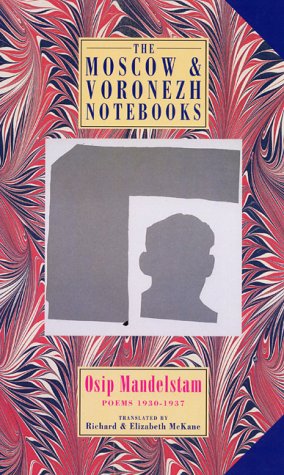 Returns these two classic works by the Russian poet to print and together for the first time.

The Moscow and Voronezh Notebooks

Book Description Paperback. Condition: New. New. Language: English. Brand new Book. Osip Mandelstam was one of the great Russian poets of the 20th century, with a prophetic understanding of its suffering, which he transformed into luminous poetry. Childish and wise, joyous and angry, at once complex and simple, he was sustained for 20 years by his wife and memoirist Nadezhda Mandelstam, who became, with Anna Akhmatova, the saviour of his poetry.The Moscow Notebooks cover his years of persecution, from 1930 to 1934, when he was arrested for writing an unflattering poem about Stalin, and subjected to gruelling interrogations and torture. The Notebooks include that fatal poem - with its clinching line 'His cockroach moustache laughs, perching on his top lip' - and present a shattering portrait of Moscow before the Great Terror. He attempted suicide twice, slashing his wrists in prison, and jumping from a hospital window. Exiled to Voronezh, he seemed crushed. A friend described him then as 'in a state of numbness. His eyes were glassy. His eyelids were inflamed, and this condition never went away. His eyelashes had fallen out. His arm was in a sling.'But it was to be four more years before Mandelstam was completely beaten. In Voronezh he broke a silence of 18 months, writing the 90 poems of the three Voronezh Notebooks. Nadezhda's memoir Hope Against Hope includes a moving account of their time in Voronezh, and Anna Akhmatova's poem 'Voronezh' describes her visit there in 1936, when 'in the room of the exiled poet / fear and the Muse stand duty in turn / and the night is endless / and knows no dawn'.With an introduction by Victor Krivulin, this edition combines the two previous separate editions of The Moscow Notebooks and The Voronezh Notebooks published by Bloodaxe. Seller Inventory # AA99781852246310