Items related to The Man Made of Rain

Kennelly, Brendan The Man Made of Rain

The Man Made of Rain 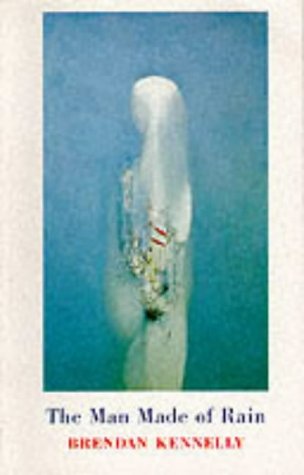 Brendan Kennelly's poetry has always taken on the mantle of the outcast, revealing as well as reviling, as The Man Made of Rain clearly shows. This book-length poem is a departure for Kennelly, a visionary work written out of the body, out of the self, out of the shadowlands between life and death. It was published in simultaneously in hardback, paperback and audio cassette formats. Now out of print, it is included in Familiar Strangers: New & Selected Poems 1960-2004. Brendan Kennelly writes: `I had major heart surgery, a quadruple bypass, in October 1996. The day after the operation I had a number of visions... I saw a man made of rain. He was actually raining, all his parts were raining slant-wise. His talk was genial, light and authoritative, a language of irresistible invitation to follow him wherever he decided to go, or was compelled by his own inner forces to go...The man made of rain would not leave me until I let his presence flow in the best and only poem I could write for him. Though I appear in the poem, or what I recognise as my "own" voice sounds through it, the poem is essentially a homage to his presence, a map of his wandering discoveries, and an evidence of my inadequate witnessing of those discoveries and that presence. He is a real presence in the poem; I am more an absence longing to be a presence.'

The Man Made of Rain is Brendan Kennelly's most important book of poetry... There is no doubt that God really had to batter this heart for over sixty years to make it shape up to such a vision. He had to tear open what must be one of the biggest hearts on the planet to let this love pour forth. And it is a vision, no mistake about it... So who is he, the man made of rain?...It is both Brendan Kennelly as a risen body and it is Christ as His Spirit lives in us as we become resurrected life. It is the mystery of the resurrection of the body, which has been spoken in the past by other poets. -- Mark Patrick Hederman

Brendan Kennelly is one of Ireland's most distinguished and best loved poets, as well as a renowned teacher and cultural commentator. Born in 1936 in Ballylongford, Co. Kerry, he was Professor of Modern Literature at Trinity College, Dublin for over 30 years, and retired from teaching in 2005. He now lives in Listowel, Co. Kerry. He has published more than 30 books of poetry, including Familiar Strangers: New & Selected Poems 1960-2004 (2004), which includes the whole of his book-length poem The Man Made of Rain (1998). He is best-known for two controversial poetry books, Cromwell, published in Ireland in 1983 and in Britain by Bloodaxe in 1987, and his epic poem The Book of Judas (1991), which topped the Irish bestsellers list: a shorter version was published by Bloodaxe in 2002 as The Little Book of Judas. His third epic, Poetry My Arse (1995), did much to outdo these in notoriety. All these remain available separately from Bloodaxe, along with his more recent titles: Glimpses (2001), Martial Art (2003), Now (2006), Reservoir Voices (2009), The Essential Brendan Kennelly: Selected Poems, edited by Terence Brown and Michael Longley, with audio CD (2011), and Guff (2013). His Journey into Joy: Selected Prose, edited by Ake Persson, was published by Bloodaxe in 1994, along with Dark Fathers into Light, a critical anthology on his work edited by Richard Pine. John McDonagh's critical study Brendan Kennelly: A Host of Ghosts was published in The Liffey Press's Contemporary Irish Writers series in 2004.

4. The Man Made of Rain Kennelly, Brendan