Items related to Island: Diary of a Year on Easdale

Island: Diary of a Year on Easdale 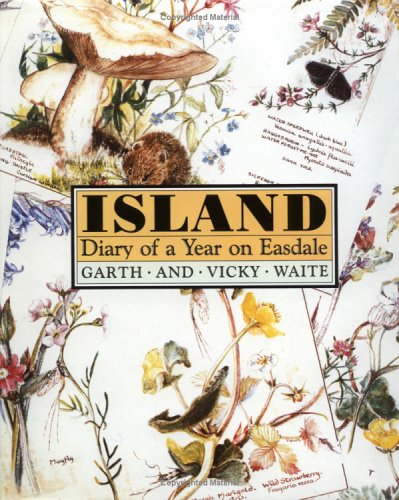 Island is a detailed and lovingly illustrated account of a newly married couple's first idyllic year on the tiny Scottish island of Easdale. It took them six years to complete, and it will delight anyone who responds to the romance of life on a remote island.

This is a detailed and illustrated account of a newly married couple's first idyllic year on the tiny Scottish island of Easdale. It all began over 20 years ago with a chance meeting on a train heading for Scotland. Garth Waite, a widower in his late 50s, was on his way to a holiday on South Uist; Vicky, a widow in her mid-fifties, was off to the island of Seil in search of peace and quiet. They talked, exchanged names and addresses, and began a friendship that 18 months later led to marriage. Their honeymoon of course had to be spent in Scotland, and it was while in a cottage on Easdale that Vicky had her great idea: "What about retiring early and coming to live here?". It was a decision that they were not to regret, and the wish to record the pleasures, sights and sounds of their first year on Easdale suggested a way of pooling their talents. This book is the fruit of Garth's lifelong love of the natural world - he was already a keen naturalist at the age of five - and of Vicky's passion for painting.

1. Island: Diary of a Year on Easdale