Items related to Legion of the Damned (Space Marine Battles) 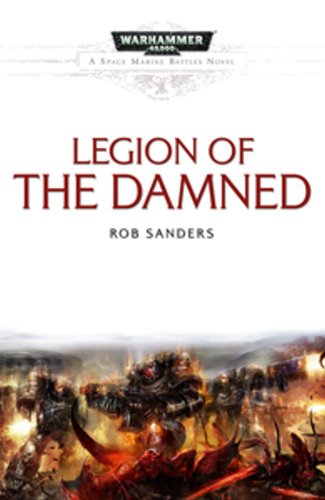 Following the trajectory of a blood-red comet, the berserk World Eaters blaze a path of destruction across the galaxy in its wake. The small cemetery world of Certus Minor appeals to the Space Marines of the Excoriators Chapter for protection, but the force dispatched to deal with this grim threat is far too small and their losses against the renegades are high. Just as all seems lost, salvation is borne out of legend itself as sinister spectral warriors descend upon this planet of the dead, and the enemies of the Imperium come face to face with those who have already travelled beyond the realm of the living...

Rob Sanders is a freelance writer, who spends his nights creating dark visions for regular visitors to the 41st millennium to relive in the privacy of their own nightmares. By contrast, as Head of English at a local secondary school, he spends his days beating (not literally) the same creativity out of the next generation in order to cripple any chance of future competition. He lives off the beaten track in the small city of Lincoln, UK. His first fiction was published in Inferno! magazine.

Book Description The Black Library, 2012. Paperback. Condition: Good. Good condition is defined as: a copy that has been read but remains in clean condition. All of the pages are intact and the cover is intact and the spine may show signs of wear. The book may have minor markings which are not specifically mentioned. Most items will be dispatched the same or the next working day. Seller Inventory # wbb0014750688

Book Description Paperback. Condition: Very Good. The book has been read, but is in excellent condition. Pages are intact and not marred by notes or highlighting. The spine remains undamaged. Seller Inventory # GOR003867854