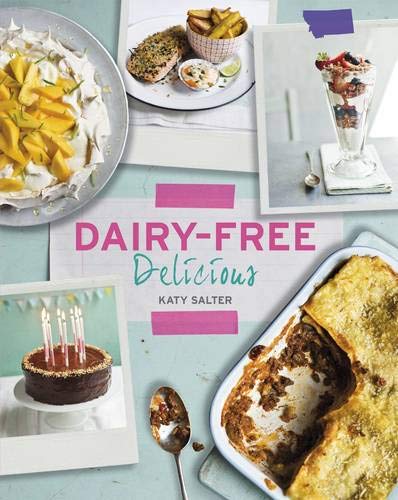 This is a book packed with brilliantly appealing breakfast, lunch, dinner and baking recipes - that also happen to be dairy-free.

Dairy-Free Delicious offers over 100 simple and irresistible recipes to inspire people to cook with imagination and eat their favourite treats. Many of the recipes are influenced by Katy's dairy-free travels, particularly in Asia where milk rarely features, and in the US - for example Thai fishcakes, Vietnamese chicken and pumpkin curry, Neapolitan iced buns and Coconut milk ice cream. Even old favourites like pancakes, creamy chicken soup, fish pie, risotto, eggs benedict, custard tarts, chocolate cake and cookies prove that lactose intolerance is no barrier to eating irresistible food every day.

UK sales of non-dairy milks have gone up 40% in the past 3 years and are predicted to increase by 56% by 2016; and the market was worth GBP519m in 2012. Diagnosed with lactose intolerance in 2011, Katy Salter has created a cookbook for people who don't want to stop enjoying food just because their bodies refuse to digest lactose properly.

'Food writer and blogger Katy Salter proves that free-from dishes can be tasty and filling...' --Bella, 5 May 2015

'With this fabulous new book, Katy proves that those who are lactose intolerant dont have to miss out on the delicious treats the rest of us take for granted.' --Sainsbury's Magazine, 1 May 2015

'When Katy Salter was diagnosed as lactose intolertant, she was appalled at what she'd be missing out on. But when she started to look at cultures where dairy is hardly present in the daily diet, such as Vietnam, Thailand and Japan, she began devising a delicious diet. She's expanded her repetoire now and this book has many alternatives to recipes we love.' --Waitrose Weekend, 5 March 2015

Katy Salter is an award-winning and acclaimed food writer and editor who contributes to The Guardian, Sainsbury s Magazine, ELLE and many others.

Book Description 2015. Hardcover. Condition: New. Hardcover. This is a book packed with brilliantly appealing breakfast, lunch, dinner and baking recipes - that also happen to be dairy-free.Dairy-Free Delicious offers over 100 simple and irresistibl.Shipping may be from multiple locations in the US or from the UK, depending on stock availability. 176 pages. 0.778. Seller Inventory # 9781849494908

Book Description 2015. Hardcover. Condition: New. Hardcover. This is a book packed with brilliantly appealing breakfast, lunch, dinner and baking recipes - that also happen to be dairy-free.Dairy-Free Delicious offers over 100 simple an.Shipping may be from our Sydney, NSW warehouse or from our UK or US warehouse, depending on stock availability. 176 pages. 0.778. Seller Inventory # 9781849494908