Items related to The Essence of French Cooking

The Essence of French Cooking 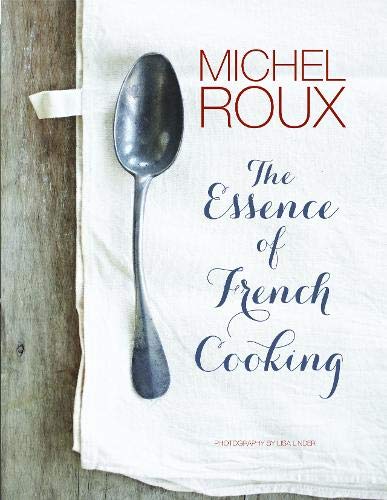 In this very personal book, Michel Roux distils a lifetime's knowledge into a definitive work on French food and cooking. Based around 100 classic recipes that have stood the test of time, this lavishly illustrated book explores the diversity of French cuisine, which for centuries has influenced so many other styles of cooking around the world. Michel gives modern interpretations of classic dishes, with his favourite variations and accompaniments. He provides expert guidance on classic techniques as well as fascinating stories about the origins of recipes, ingredients and regional culinary traditions. In addition, there are features on French cheeses and wine. Photographed on location in France, this extraordinarily beautiful book embraces the timeless essence of French cuisine and conveys the flavours and variety of French cooking today.

'From Gigot de Lotte en Cocotte to Tarte des Demoiselles Tatin aux Poivres, the maitre of French cuisine offers a definitive collection of more than 100 of his favourite French recipes in this sumptuous and personal book, representing his 45 years of culinary experience.' --The Bookseller, June 2014

Michel Roux is a legendary chef and one of the world's greatest experts on French cuisine. At his renowned restaurant, The Waterside Inn at Bray, he has held three Michelin stars for an astonishing 30 years. His career has been hugely successful ever since he opened his first restaurant, the acclaimed Le Gavroche in London, with his brother Albert in 1967. He holds countless other culinary honours and he was awarded an OBE in 2002 and the Chevalier de la Legion d'Honneur in 2004. He has written many successful books, including Eggs (2005), Pastry (2007), Sauces (2009), Desserts (2011) and Michel Roux: The Collection (2012), published by Quadrille. He has appeared in several television series and regularly appears on Saturday Kitchen. In The Roux Legacy, televised in 2012, leading food critics and top chefs described the Roux family as the most important culinary influence ever in Britain.