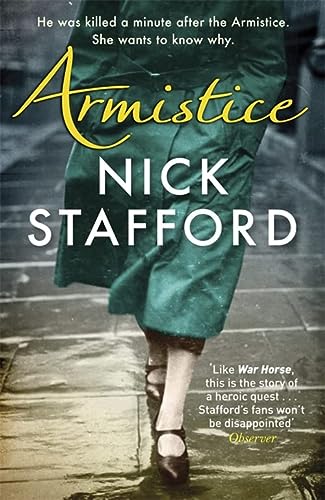 'There's a raw, urgent power to Stafford's depiction of the grief and desperation of the postwar world' Guardian.

'Like War Horse, this is the story of a heroic quest... Stafford's fans won't be disappointed' Observer. --Reviews.

11am, 11th November 1918. The Armistice begins and 2nd Lieutenant Daniel Case, Philomena Bligh's fiancé, is killed on the battlefields of France.
Months later, Philomena ventures to London to meet the men who were with Dan when he died. His best friend Jonathan Priest, tells her that he believes Dan was murdered. But he has no proof, and the accused comes from a powerful Establishment family whose lawyers have threatened him with ruin should he ever repeat his story.
Jonathan has returned to work as a barrister, but has increasingly found himself unable to cope with the miscarriages of justice he believes he allowed to take place. Philomena's shock and outrage send her on an investigation that will take her down the elegant avenues and seedy alleys of the capital, from cafés where single women eat alone to nightclubs where everyone looks for escape beyond conventions and the law.
Fearing she will betray him, Jonathan joins Philomena but soon finds himself becoming inexorably drawn to her, until he's forced to tell her his own part in Dan's death...