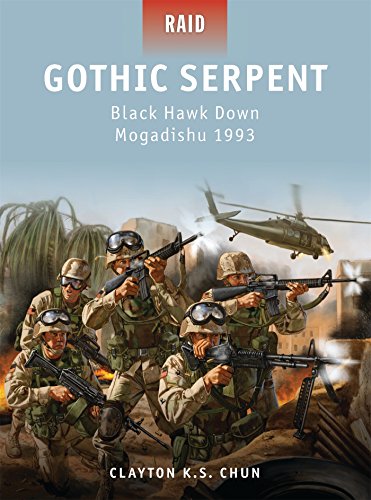 A detailed study of the strategy and pitfalls of Operation Gothic Serpent in Somalia.

Book Description Osprey Publishing, United Kingdom, 2012. Paperback. Condition: New. Johnny Shumate (illustrator). Language: English. Brand new Book. The United States had demonstrated its military superiority worldwide with its lightning victory over Iraq in 1991. As the only superpower in the world, few would argue that Washington could not prevail in a conventional conflict. Humanitarian missions, however, were another story. Although the United States had experience in a few humanitarian missions, it had just concluded operations in northern Iraq, and was soon to support the United Nations program to help the people in a failed state - Somalia. Somalia was falling apart; it had ceased to exist as a country. Warring tribes had reduced it into an area controlled by warlords. Clan and internecine warfighting had caused major disruption in Somali life. Starvation was a weapon used by the clans. Humanitarian aid and relief arrived but, without security, this support provided little help to the people. On 15 August 1992, President George H.W. Bush ordered military units to airlift supplies into Kenya under Operation Provide Relief. These supplies would enter Somalia with international relief organizations. Still, clans stole the aid for themselves, harassed international relief agencies, extorted money, and allowed starvation to continue. By 8 December, Bush ordered Marines, the US Army's 10th Mountain Division, and Special Forces into Somalia to help UN forces bring order. Some 13,000 American military personnel became part of a security force of 38,000 from UN countries. This massive force helped stabilize Somalia, but the warring factions waited for an opportunity to reassert themselves. By October 1993, the UN security force had shrunk to 16,000, with 4,000 Americans. Two Somali warlords - Muhamed Farrah Aideed and Ali Mahdi Mohamed - had been fighting over control of the capital and main port of Mogadishu. A raid on 3 October, TF Ranger's seventh, aimed at capturing high-ranking Aideed aides initially succeeded with a surprise assault in Mogadishu. While transferring the prisoners to a convoy, Aideed supporters shot down two Army Blackhawk helicopters. These actions resulted in heavy firefights throughout the route of evacuation and the crash sites. The Rangers and others, including two Special Forces snipers who held the second crash site alone, attempted to secure and rescue the downed helicopter crews. The Americans could call on helicopter gunships and had heavy firepower, but against an enemy difficult to identify, in an urban setting, outnumbered, and with darkness approaching, the situation looked grim. The Rangers and Special Forces (Delta Force) fought all night. The10th Mountain Division, Malaysian, and Pakistani forces rescued the Rangers at the first crash site the next day. At the second crash site, Aideed's forces had overwhelmed the area. The two Special Forces snipers died (they received the Congressional Medal of Honor posthumously). In the end, TF Ranger lost 16 killed and 83 wounded. One person died from the relief column. Aideed's force lost 500-1,000 killed and unknown numbers of wounded. Seller Inventory # AAS9781849085847